An ODOT conservation bank will assist families in Jackson County this winter by providing roughly 30 cords of seasoned oak firewood to heat their homes.

Partnering with ACCESS, a community action agency in Jackson County, ODOT is coordinating removal of the wood from an 80-acre conservation bank located near White City. ACCESS runs its community firewood outreach program with help from the Westminster Presbyterian Church.

“We go through 50-60 cords of wood each year,” said John Rich, who coordinates the firewood outreach program for the Westminster Presbyterian Church. “This opportunity will be very helpful. Last year, we ran out because the need was so great. This year, I’m sure we’ll get even more requests.”

According to Jacob Kercher, ODOT wetland specialist and project manager, the contract initially went out to bid to remove woody debris that cannot be burned, including the fallen oak trees.

“Once we made contact with ACCESS and learned of the program in Jackson County, we quickly changed our contract so that the firewood could go to needy families,” Kercher said.

The remaining brush is already in stacked piles ready to burn later this fall. The goal is to restore the area to pre-settlement habitat, which improves the vernal pools and helps the conservation bank meet its federal and state performance standards.

“The controlled burns will prepare the soils for seeding with native forbs and grasses,” said Kercher. “We will hire a professional burn crew to remove the woody debris piles. In the meantime, we’re coordinating with Jackson County Fire District #3 and the Department of Environmental Quality to ensure we have permits in place and are complying with state and local requirements.”

Conservation bank
A conservation bank is permanently protected land managed for endangered, threatened, and other at-risk species. In exchange for this protection and management, the U.S. Fish and Wildlife Service will approve credits based on the natural resource values on the bank land. ODOT can then use these credits to compensate for the environmental impacts of highway projects.

The species in question include two endangered plants and the threatened vernal pool fairy shrimp, an inch-long translucent crustacean related to lobsters and saltwater shrimp. Each of the species occur in vernal pool habitat— small, shallow wetlands that fill with water during fall and winter rains and dry up in spring and summer.

The ODOT bank provides critical habitat for each of the at-risk species. Along with a neighboring Nature Conservancy preserve, the bank is part of a single block of nearly 225 acres of protected vernal pool habitat.

In addition to addressing species issues, the ODOT bank is available to compensate for impacts to wetlands. The U.S. Fish and Wildlife Service, the U.S. Army Corps of Engineers, and the Oregon Department of State Lands collaborated to allow for approval of the bank’s dual purposes under a single set of standards and procedures. This reduced the time ODOT spent on developing the bank and contributed to the agency’s decision to become Oregon’s pioneering conservation banker. 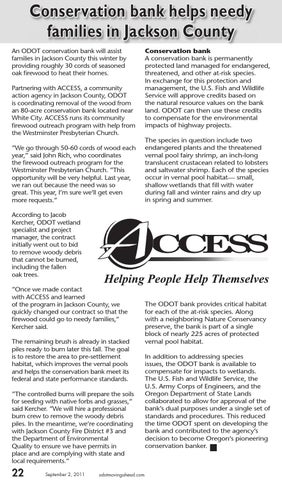