The Fern Valley Interchange project recently received federal approval, following a lengthy design process. The $73 million project is undergoing final design as technical teams, including right of way agents and highway engineers, wrap up their work so construction can begin in 2013.

“Federal approval of the design process is a major milestone for this project,” said ODOT Environmental Project Manager Anna Henson. “The next hurdle is to complete final design so we can stay on schedule for construction.”

The Fern Valley Interchange project is fully funded thanks to the 2009 Oregon Jobs and Transportation
Act (JTA).

“The JTA investment was great news,” said ODOT Area Manager Art Anderson. “A major investment like that reflects the excellent work accomplished in the Rogue Valley.”

The problem
The Fern Valley Interchange connects Interstate 5 and Phoenix at exit 24. The interchange experiences traffic congestion throughout the day, but is especially severe during the morning and evening commutes. Existing and proposed development along the east side of I-5, as well as development growth within the Rogue Valley, are choking the interchange’s capacity and causing safety concerns.

The process
The project’s design phase began in 2004. The Fern Valley Through design alternative was eliminated in 2009 because it would have an adverse impact on nearby farm land. Later, the Project Development Team unanimously supported the North Phoenix Through build alternative as part of the federally-required environmental assessment.

The solution
ODOT will construct the Fern Valley Interchange project using a crossing-diamond design that provides a higher capacity to move traffic while reducing right of way needs. 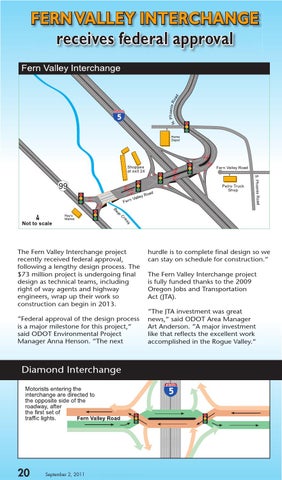