If you packed up your kids for a summer camping trip or just spent a day on Emigrant Lake, you drove through the Neil Creek Bridge replacement project on Greensprings Highway (Oregon 66) north of the lake.

The new bridge replaces a narrow structure originally built in the 1920s. The new bridge will be 44 feet wide – nearly twice the width of the original structure – with two travel lanes and wide shoulders to meet today’s standards.

The contractor placed beams for the first half of the bridge in early August.

“This location is a choke point on the roadway, which makes tight quarters for workers,” said ODOT Public Service Representative Dennis Steers. “The work must be completed in one season because we face an in-water work period that runs from June 15 to Sept. 15.” 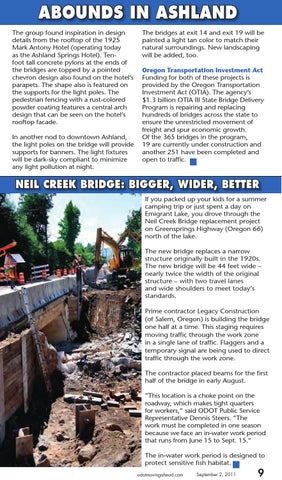