Fresh blacktop and a smoother ride are just some of the indicators that construction is nearly complete on the Oregon 62 Owen-Coker Butte project.

Following the 2010 opening of Owen Drive to Oregon 62 and Springbrook Road, the majority of the work over the past spring and summer was focused on realigning Crater Lake Avenue in the area near Coker Butte Road, east of Crater Lake Highway (Oregon 62).

Prime Contractor Knife River Corporation (of Central Point, Oregon) is building the two-year project, which is managed by the City of Medford.

“We’re on schedule, and looking to complete all of the roadway work this fall,” said Medford City Engineer Larry Beskow. “It’s turned out to be a good public improvement for the state highway and for the City of Medford.”

The Oregon 62 Owen-Coker Butte project is designed to improve safety and traffic flow, and reduce congestion on Crater Lake Avenue and Crater Lake Highway. When complete, the City of Medford will take jurisdiction of this section of Crater Lake Avenue.

The latest phase of construction is centered on completing the realigned Crater Lake Avenue through city-owned property that was occupied by Hertz Car Sales. The business was temporarily relocated to the north on Highway 62 during this construction phase.

Next, the new leg of Coker Butte Road will be constructed and paved, adjacent to the Rogue Disposal property between Oregon 62 and Crater Lake Avenue.

According to Beskow, the project saved more than $1 million in taxpayer funds because Rogue Disposal donated right of way for the realigned Coker Butte Road. 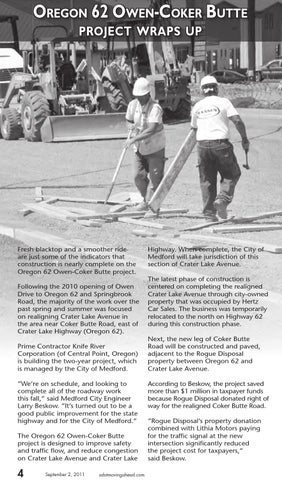