A project in Cave Junction will make crossing U.S. 199 (Redwood Highway) easier and safer for both walking to school on River Street as well as pedestrians patronizing downtown businesses.

Prime contractor H2 Construction (of Central Point, Oregon) is working on both crossings. The $541,000 involves construction of a traffic signal and pedestrian crosswalk on the north end of town at River Street, near the community’s three public schools— Evergreen Elementary, Lorna Byrne Middle School and Illinois Valley High School.

The project schedule called for the signal improvements to be substantially complete by the beginning of the school year. However, ordering delays for the traffic signal poles will push project completion until later this fall.

“The contractor got pinched in getting the drawings approved and the poles manufactured in a timely manner,” said ODOT Project Manager Tim Fletcher. “With only a handful of fabricators of signal poles nationwide, it’s easy to get caught in the time bind during the busy construction season.

“We apologize for the delay.”

An unofficial mid-block crosswalk has existed in Cave Junction for years. However, with four lanes of traffic in the busy commercial corridor, the pedestrian crossing was hazardous. ODOT’s traffic section made recommendations and secured additional funds for a new, state-of-the-art, pedestrian-activated flashing beacon to alert motorists that a pedestrian is about to enter the crosswalk.

“Both crossings have been top priorities of Cave Junction for nearly a decade,” said City Recorder Ryan Nolan. “We’re excited to see them completed for the safety of our residents.”

The new Redwood Highway traffic signal at River Street includes a short median to accommodate left turn lanes on either side of the intersection. Since the project began in July, ODOT has ensured business access remains open and that blue ‘Business Access’ signs provide greater visibility.

“Businesses near River Street expressed concern about the addition of the short, mountable median and how it would affect their access,” said ODOT Project Leader Dick Leever. “But the addition of the traffic signal will make it easier and safer to get in and out of those businesses. We’re confident that when the project is finished the community will like how the new crossing operates.” 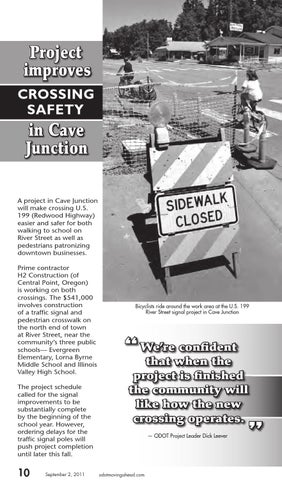