A tale of two bridges in Ashland

“It’s hard to believe that over a year and a half ago, the contractor began this project,” said ODOT Public Service Representative Dennis Steers. “From a driver’s perspective the work looks finished, the old bridge was torn down and replaced.”

Bridge replacement at exit 19 has been an easier process than bridge repair at exit 14, Ashland’s south interchange. Prime contractor Concrete Enterprises (of Stayton, Oregon) might go beyond the April 2012 contract end date.

“We discovered the repairs needed on the exit 14 bridge are more significant than we previously estimated,” Steers said. “The contractor found rebar and concrete that was not repairable. That meant taking the old bridge deck off and starting fresh with new rebar and concrete.

“At this point, we’re not sure if this setback will push the schedule back. However, drivers will continue to experience the split road configuration for some time.”

“Drivers need to continue to be alert during the winter months as workers and equipment will regularly cross the travel lanes,” Steers said.

Aesthetic design
The new bridges at I-5 exits 14 and 19 will feature artistic treatments that reflect downtown Ashland’s historic architecture and natural environment.

A nine-member Aesthetic Advisory Committee, appointed by the City of Ashland, recommended an Art Deco theme for the bridges.

The group found inspiration in design details from the rooftop of the 1925 Mark Antony Hotel (Ashland Springs Hotel). Ten-foot tall concrete pylons at the ends of the bridges are topped by a pointed chevron design also found on the hotel’s parapets. The shape also is featured on the supports for the light poles. The pedestrian fencing with a rust-colored powder coating features a central arch design that can be seen on the hotel’s rooftop facade.

In another nod to downtown Ashland, the light poles on the bridge will provide supports for banners. The light fixtures will be dark-sky compliant to minimize any light pollution at night.

The bridges at exit 14 and exit 19 will be painted a light tan color to match their natural surroundings. New landscaping will be added, too.

Oregon Transportation Investment Act
Funding for both of these projects is provided by the Oregon Transportation Investment Act. The agency’s $1.3 billion OTIA III State Bridge Delivery Program is repairing and replacing hundreds of bridges across the state to ensure the unrestricted movement of freight and spur economic growth. Of the 365 bridges in the program, 14 are currently under construction and another 256 have been completed and open to traffic. 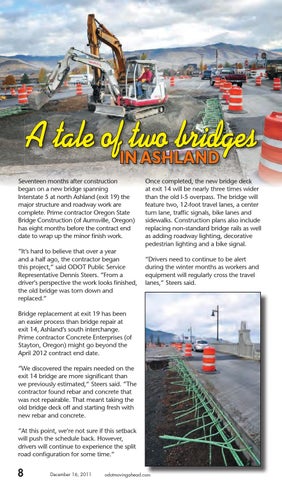