ODOT Project Manager Tim Fletcher is now looking at a March 2012 completion date for the Cave Junction safety project because of delays related to the signal poles.

Designed to improve two pedestrian crossings on U.S. 199 (Redwood Highway), the project was originally scheduled for completion before the start of the current school year since the River Street crossing is near the community’s three public schools — Evergreen Elementary, Lorna Byrne Middle School and Illinois Valley High School.

According to Fletcher, now that the contractor has finalized their design for signal pole fabrication and received approval, the poles can be made. Between this delay, manufacturing and shipping time, and the holidays delivery may be pushed back until February.

“Conservatively, it may be until the end of March before the signals are up and running,” said Fletcher.

In addition to construction of a traffic signal and pedestrian crosswalk at River Street, the project improves a mid-block crosswalk in downtown Cave Junction where one has existed for years. The project adds a state-of-the-art, pedestrian-activated flashing beacon to alert motorists that a pedestrian is about to enter the crosswalk.

Prime contractor H2 Construction (of Central Point, Oregon) is being assessed liquidated damages of $700 per day. H2 Construction chose a pole supplier from Oklahoma that had never manufactured poles to ODOT specifications. According to Fletcher, there are only a handful of fabricators nationwide that are approved to build signal poles to ODOT specifications.

“Signal poles are not an off-the-shelf item, so one hiccup in the process can really affect the timeline,” said Public Service Representative Dennis Steers. “However, our Rogue Valley project office managed $28 million of construction this past summer. The Cave Junction project represents less han two percent of that total, so we are trying to keep the issue in perspective.

“Nonetheless, our focus now is to get this project back on track and make sure these safety improvements are built as promised.”

The new Redwood Highway traffic signal at River Street includes a short median to accommodate left turn lanes on either side of the intersection. Since the start of the project in July, ODOT has ensured business access remains open and that blue ‘Business Access’ signs provide greater visibility. 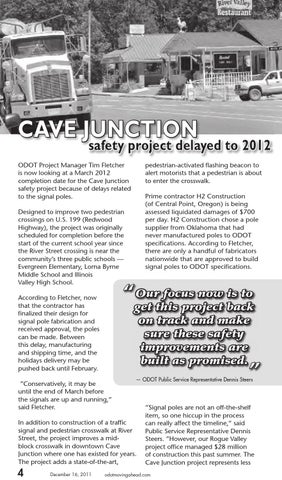