Interstate 5 is the primary freight corridor on the West Coast. Along a 150-mile stretch from the Oregon-California border to Lane County are seven steep climbs that create significant congestion issues for commercial truck traffic.

“Southern Oregon is the weakest link in the I-5 corridor,” said ODOT Project Leader Mark Leedom, who is managing the I-5: Glendale to Hugo Paving and Sexton Climbing Lane project scheduled to begin construction in 2013.

The project will pave 17 miles of I-5 between Hugo and Glendale, build a northbound climbing lane on Sexton Mountain and make other safety improvements in the project area. Construction will begin in 2013 and likely extend into 2014.

Other improvements planned in the project include adjusting the southbound curves just south of Smith Hill to make them safer. Old and damaged guardrail and median barrier will be replaced throughout the length of the project. New signage will also be added in some locations.

ODOT is currently constructing three short climbing lanes along I-5 north of Roseburg. One is located in the southbound direction at Rice Hill and there is one in each direction on the hill between Sutherlin and Oakland. Each of these climbing lanes is about one mile in length.

Climbing lanes also exist on Interstate 84, where there is a seven-mile truck climbing lane east of Pendleton and on I-5 south of Salem, where a three-mile climbing lane assists northbound traffic.

Commercial trucks can be seen using I-5 shoulders to navigate mountain passes. The new climbing lane will be built to today’s standards, thereby reducing the need for on-going shoulder maintenance.

ODOT only has funding to construct one climbing lane as part of this project. Of the six potential climbing lanes in this segment of I-5, ODOT determined the greatest need exists at the northbound Sexton site.

“While there is no funding to build other climbing lanes at this time, the intent is to eventually add lanes on each of the three passes between Glendale and Hugo,” Leedom said. 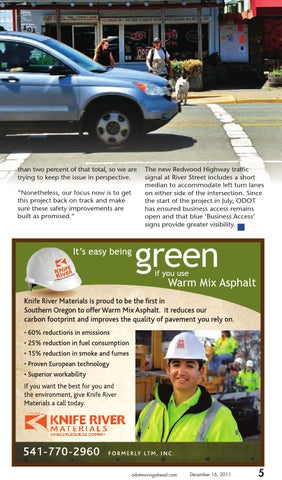