The highway is fully open with both lanes of traffic and no longer controlled by a temporary signal. The new bridge replaced a narrow structure originally built in the 1920s. The new bridges is 44 feet wide, nearly twice the width of the original structure, with two travel lanes and wide shoulders to meet today’s standards.

Prime contractor Legacy Construction (of Salem, Oregon) built the bridge one half at a time, with traffic controlled by a signal. The construction contract was $971,000.

“Although paving of the roadway base beat the start of the autumn rains, Legacy will return next spring to pave the final wearing course of the roadway,” said ODOT Public Service Representative Dennis Steers. “Permanent striping will then be applied to the roadway for a project wrap. But until then, the roadway is open and striped for both vehicles and bicycles.” 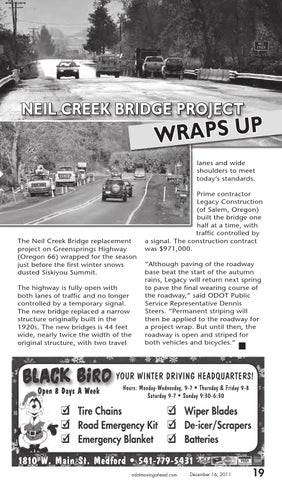