Knife River is building a low level median and installing a new traffic signal at Hubbard Lane as well as a new multi-use path on the north side of Redwood Highway between Dowell Road and Hubbard Lane.

“We had a full summer construction season and nearly got everything complete,” said ODOT Public Service Representative Dennis Steers. “The weather held, so Knife River finished the base paving complete on the highway and final paving everywhere else.

“They’ll be back next spring to finish the final paving on the highway and install the medians.”
Project design and development began in 2006 with a federally-required study of the corridor that included public input on the project.

The $3.5 million first phase of the U.S. 199 Expressway project improved safety along more than two miles of the corridor’s west side from RCC to Midway Avenue. The first phase installed medians to channe4l turning traffic and a raised median to stop a vehicle from crossing into the oppose lanes of travel. The project accommodated U-turns at Hubbard Lane and a wider intersection at Midway Avenue.

Final phase shelved
Earlier this year the Rogue Valley Area Commission on Transportation voted to remove the remaining $4.5 million from the final phase of the U.S. 199 Expressway project.

RVACT later reallocated the funds to other Josephine County projects. However, ODOT will move ahead with plans to remove the traffic signal in front of the Josephine County Fairgrounds in spring 2012.

RVACT is an advisory body that considers regional and local transportation issues affecting the state system.

“We’re working with the fair board, local stakeholders and the Josephine County commissioners on a new accesses west of the fairgrounds,” said ODOT Area Manager Art Anderson.

“Congestion and safety issues still exist on the highway, so we’re moving ahead with plans to remove the signal, said Anderson.” 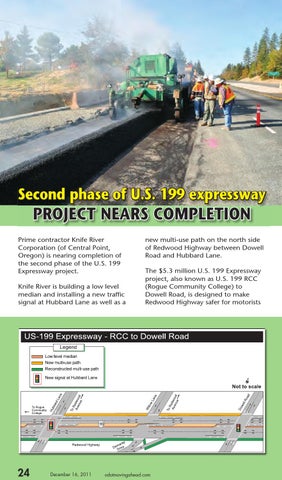