Together, we can make US 199 safer

Highway projects are often topics of public discussion and debate at coffee shops, water coolers and even in the newspaper. No project in recent memory has received as much attention in Grants Pass as the Oregon Department of Transportation’s plans to remove the Josephine County Fairgrounds signal on US 199.

Next summer, ODOT will remove the signal and make other improvements to solve the crash and congestion problems at that particular intersection. This upgrade to the U.S. 199 corridor was part of a larger effort to improve safety and congestion. Planning for this endeavor began following the death of Rogue Community College student Holly Repp in 2003, who was killed as she attempted to cross the highway.

Following that tragedy, the city of Grants Pass and Josephine County agreed to be part of a larger team and look at improvements for the entire corridor. With stakeholders from the surrounding community that included Holly’s father, Randy Repp, ODOT initiated a federally required study of the corridor. Discussions grew contentious when the group focused on Allen Creek Road east toward the South Y. However, all parties strongly agreed that improvements west of Allen Creek Road on U.S. 199 were essential.

The second of two phases between Midway Avenue and Dowell Road is currently under construction. While the Alternative A project for U.S. 199 east of Allen Creek Road was canceled and the funds were redirected by the Rogue Valley Area Commission on Transportation, part of this project contained safety funds for the removal of the fairgrounds signal.

Eighty-eight traffic crashes occurred at the Fairgrounds intersection over the past three years, making it one of the most dangerous intersections in southern Oregon with an average of two and a half crashes per month.

With more than 40,000 vehicles traveling the US 199 corridor daily, some crashes are inevitable. However, we can reduce the number of crashes and their severity by working together. The spirit of cooperation between ODOT, Grants Pass, Josephine County and local stakeholders has already resulted in significant safety improvements on U.S. 199. Together, we can continue to make this corridor safer for everyone.

About Art Anderson
Prior to working with ODOT, Art Anderson served 20 years as a Civil Engineering Air Force officer. As area manager for the Rogue Valley the past nine years, he oversees state highway construction projects in Josephine and Jackson Counties. He represents ODOT as a member of the Rogue Valley Area Commission on Transportation. 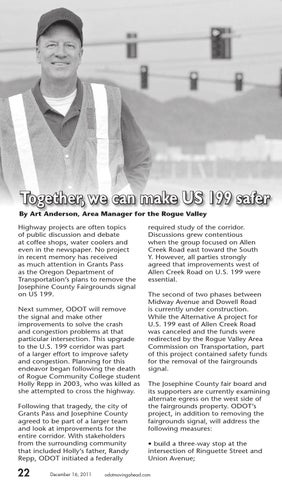