Nearly $30 million of construction work at Ashland’s Interstate 5 interchanges is wrapping up after more than two years of work to upgrade the I-5 bridge at exit 14 and replace the bridge at exit 19.

The Green Springs Highway (Oregon 66) Bridge is being widened from the center out to accommodate higher traffic volumes and improved bicycle and pedestrian safety. The new bridge will be nearly three times wider than the original I-5 overpass, featuring two, 12-foot travel lanes, a center turn lane, traffic signals, bike lanes and sidewalks. Non-standard bridge rails were replaced. Roadway lighting, decorative pedestrian lighting and a bike signal were also added.

Crews poured and stamped colored sidewalks. Final paving follows along with installation of new traffic signals at the I-5 ramps. According to ODOT Public Service Representative Dennis Steers, the cooler autumn temperatures provide a good opportunity for plants to establish in the interchange landscaping.

“Drivers have been patient with the split-road configuration in the construction zone and the delays,” said Steers. “We’re close enough to completion that the public can now see how much better this bridge serves the community.”
A contract change order in October 2011 was needed for unanticipated work at exit 14. Originally designed to rough up the bridge deck and recap it with concrete, the project ran into an unpleasant surprise. Once the asphalt cap was removed, prime contractor Concrete Enterprises (of Stayton, Oregon) discovered irreparable rebar and concrete. A specialized hydro-demolition crew was brought in to chew up the deck. The prime contractor then started fresh with new rebar and concrete.

“The contractor did a great job adjusting,” Steers said. “The work took a little longer than expected but the final product is a solid improvement.”

Prior to the bridge repair work, an eighth-mile section of I-5 was lowered so the 45-year-old bridge sits 17.4 feet above the roadway, in compliance with modern clearance standards.

“The color and design blend well with Ashland’s landscape,” said Katharine Flanagan, director of sales and marketing for Ashland Chamber of Commerce, who was also on the project’s Aesthetics Advisory Committee.

The group found inspiration in design details from the rooftop of the Ashland Springs Hotel, first constructed in 1925. Ten-foot tall concrete pylons at the ends of the bridges are topped by a pointed chevron design also found on the hotel’s parapets. The shape also is featured on the supports for the light poles. The pedestrian fencing with a rust-colored powder coating features a central arch design that can be seen on the hotel’s rooftop facade.

In another nod to downtown Ashland, the light poles on the bridge include supports for city-supplied banners. The light fixtures are dark-sky compliant to minimize any light pollution at night.

The bridges at exit 14 and exit 19 are a light tan color to match their natural surroundings.

“The design came out great as a welcoming gateway into Oregon, from both a highway and Ashland Street perspective,” said Flanagan. “We look forward to experiencing the new lanes, sidewalks and traffic signals.”

Approaching the interchange from the east, a dedicated right-turn lane is in place for vehicles turning northbound on I-5. Cyclists approaching from the east will continue in the bike lane, traveling straight across the overpass.

Cyclists traveling east on Green Springs Highway will encounter a bike signal activated by a detector loop to address the safety issue. The bike signal will allow cyclists to cross the southbound I-5 on-ramp before vehicles are allowed to turn southbound.

While still relatively new to Oregon, bike signals are an emerging transportation technology. Ashland is among the first communities outside the Portland metro area to receive one.

OTIA: The agency’s $1.3 billion OTIA III State Bridge Delivery Program is repairing and replacing hundreds of bridges across the state to ensure the unrestricted movement of freight and spur economic growth.

Oregonians had not seen an investment of this magnitude in highway and bridge construction since the state’s interstate freeway system was built in the 1950s and ’60s.

Of the 365 bridges in the program, 11 are currently under construction and another 260 have been completed and open to traffic.

Now in its ninth year, the bridge program remains within budget. By the end of 2013, all but one project will be open to traffic.

The bridge program ensures the safety of Oregonians by strengthening the state’s aging transportation infrastructure.

ODOT has been addressing Oregon’s aging bridges for more than 11 years. Environmental assessments of state bridges began in 2001, and the Economic and Bridge Options Report contributed to the passage of the 2003 Oregon Transportation Investment Act, which funded the bridge program.

In 2010, the program spent more than $174 million on construction, design and program management. Of those expenditures, 89 percent went to Oregon firms. Since work started in 2003, businesses and individuals have earned more than $991 million after taxes.

Through 2011, the bridge program has sustained more than 17,000 jobs. Overall, the program will create or sustain approximately 23,000 jobs.

Without bridge program funding, weight limits on Oregon’s aging bridges would become common. At the time OTIA III was enacted, the potential cost to Oregon’s economy was estimated at $123 billion in lost production and 88,000 lost jobs in the next 25 years. 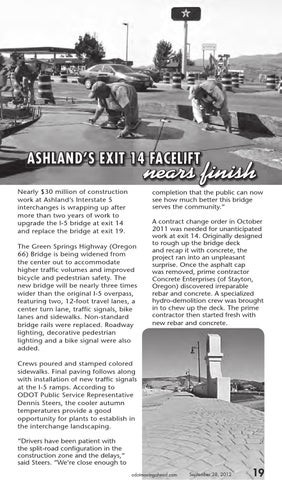