Southern Oregon residents can attest to driving in one of the most mountainous regions of the United States, however, not many motorists are aware of the constant battle to keep highways from sliding down hillsides.

During this past summer ODOT geologists and contract drillers bored deep holes into four active slides on Oregon 66, Oregon 272 and Interstate 5 to place monitoring instruments that determine not only what’s going on under the surface but also what kind of fix is needed to repair the slide.

“Drilling and setting our instruments provides us with invaluable data that we can incorporate in our repair plans,” said Wyttenberg. “The monitors give us a picture of the slide’s vertical and horizontal shifts as well as the location of the slip plane [a weak plane in a rock mass from which material is likely to break off in a slide].”

According to Wyttenberg, the regional slide budget of roughly $1 million per year is a challenge due to the soils found in southwest Oregon, especially along the Oregon Coast Highway (U.S. 101).

A perennial headache exists on the historic Green Springs Highway (Oregon 66) at milepost 12, near the Cascade summit. A large nearby drain and culvert were added several years ago to divert water away from the slide area. Wyttenberg said ODOT maintenance crews return every spring and summer to repair the slide only to see it break away the next winter.

“That’s the price we pay for building roads in these rugged areas,” said Wyttenberg. 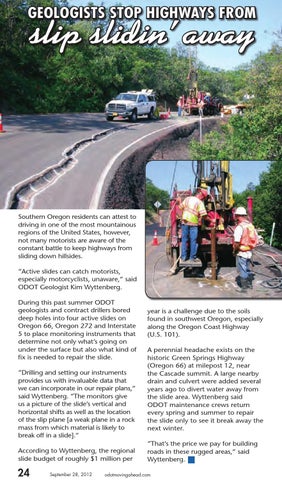