The DEIS examines the impacts of the proposed multimodal solution. This $120 million project, formerly known as the Oregon 62 Corridor project, extends 7.9 miles from Interstate 5 exit 30 to Dutton Road. The project purpose is increasing capacity and safety on this strategic highway that connects I-5 with Oregon Highways 140 and 62.

“Nearly eight years of work have gone into this project,” said ODOT Project Leader Dick Leever. “The DEIS summarizes the complete build out of how this project, estimated to cost $400 million, could affect the human and natural environment in this corridor.

The project’s first phase is slated for construction in 2014. The 2009 Oregon Jobs and Transportation Act invested $100 million into the next phase of the project, which builds a four-lane expressway, along with sidewalks and transit-related enhancements on the existing highway.

The proposed 4.5-mile expressway would start at a small directional interchange from Crater Lake Highway near Whittle Road, follow the east side of the Medford Airport, pass over Vilas Road, and terminate at a traffic signal on the existing corridor near Corey Road.

ODOT attempts to hold all public meetings in accessible buildings. Accommodations will be provided to persons with disabilities. Alternate formats are available upon request. If a sign language interpreter is needed, please call Christie Meacham at 541-957-3698 at least 48 hours prior to the meeting. 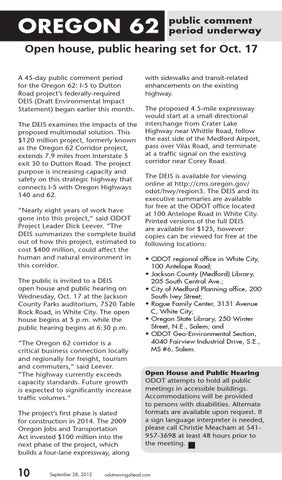