Almost five years since the last freight train trudged from Weed, Calif. to Ashland, a triumphant collaboration of private and public stakeholders hear the train a comin’ again. The proverbial light at the end of tunnel — a $9.49 million rehabilitation project with a 2013 construction start date — is expected to reopen the Siskiyou Rail Line within the next two years.

The Siskiyou Summit Railroad Revitalization project will repair and revitalize a section of the 296-mile stretch of the short line railroad, including rail, tunnels, ties and bridges as well as upgrading its freight capacity to handle the 286,000-pound industry standard for rail cars.

Last June, the $7 million Transportation Investment Generating Economic Recovery (TIGER) grant awarded to the Oregon Department of Transportation and California’s Siskiyou County for the Siskiyou Summit Railroad Revitalization project was met with a celebratory roar throughout the region.

“Reopening of the Siskiyou Summit line will have an immediate and important positive economic impact for Southern Oregon,” Wyden said in a prepared statement when the TIGER grant was awarded. “It will save shippers hundreds of thousands dollars in transportation costs, get goods to market more efficiently, take heavy trucks off the interstate and reduce road damage.”

Central Oregon and Pacific Railroad (CORP), which owns the line, will backfill the remainder of the project cost along with the help of private shipping companies. Meanwhile, ODOT and CORP are working together with the Federal Rail Administration to complete the federal processes, agreements and guidelines necessary before construction can begin.

“The TIGER grant was critical to moving this endeavor forward” said ODOT Area Manager Art Anderson. “These federal grants are extremely competitive. Our application wouldn’t have been successful without the combined private and public support from both states.”

“The Siskiyou Summit Railroad Revitalization project will improve our regional economy by re-establishing a more economically-competitive method of shipping goods.”

The contract is on schedule to be let by the end of April 2013, well ahead of the Sept. 30, 2013 statutory deadline for obligating funds.

“The potential for reduced emissions and reduced traffic on I-5 is a benefit in the Rogue Valley,” Montero said. “However, companies around Oregon will also gain from adding a much-needed shipping option. Bulk freight and heavier materials like lumber can be shipped more economically on rail.”

A second, smaller project funded through the ConnectOregon IV program will improve the clearances of tunnels and other rail infrastructure between Douglas and Jackson counties. The $5.7 million project, which received a $4.5 million ConnectOregon IV grant, will open access to the Rogue Valley with modern, high-capacity rail car equipment.

Bob Ragon, spokesman for Coos-Siskiyou Shippers Coalition, said work on the smaller project could begin later this year. The Coalition was at the forefront of bringing together industry, CORP, and local, state, and federal government representatives to pursue the TIGER grant program.

“The ConnectOregon project will allow taller, high-capacity boxcars to be used on the Siskiyou Line,” said Ragon. “These rail line improvements help give local companies a competitive edge, protecting jobs and enhancing industrial growth in Northern California and Southern Oregon.”

The Transportation Investment Generating Economic Recovery, or TIGER Discretionary Grant program, invests in road, rail, transit and port projects that promise to achieve critical national objectives. Congress dedicated $1.5 billion for TIGER I, $600 million for TIGER II, and $526.944 million for the FY 2011 round of TIGER Grants to fund projects that have a significant impact on the nation, a region or a metropolitan area.

Each project is multimodal, multi-jurisdictional or otherwise challenging to fund through existing programs. Applications were evaluated through a competitive process by technical and professional experts at the DOT, and project benefits were analyzed to ensure that limited funds were spent most effectively. The TIGER programs use rigorous, multimodal selection criteria and the results of economic analysis to select projects and track the effectiveness of TIGER investments through focused project-specific performance measurement plans.

The TIGER program enables the DOT to use a rigorous process to select projects with exceptional benefits, explore ways to deliver projects faster and save on construction costs, and make investments in our Nation’s infrastructure that make communities more livable and sustainable.

The 2011 Oregon Legislature authorized $40 million for ConnectOregon IV. After initially receiving 70 applications, 38 projects were chosen, totaling $40,038,333 in ConnectOregon IV funding. In total, these 38 projects will leverage approximately, $95 million in other funds.

ConnectOregon is a lottery-bond-based initiative first approved by the 2005 Oregon Legislature to invest in air, rail, marine/ports and transit infrastructure. More than 100 multimodal projects have been approved for funding through the ConnectOregon program. 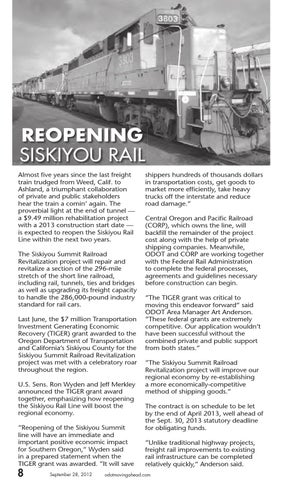