Heavy equipment and dump trucks typically aren’t the machinery that comes to mind when you think of fish habitat restoration but at Kane Creek, a Rogue River tributary near Gold Hill, these resources and more are clearing obstacles for the upstream migration of steelhead and other species.

ODOT maintenance crews began work in August with a federal investment of $2 million specifically allocated for fish habitat restoration, the first of two projects in the area. The stream restoration project targets a 75-yard run downstream from a box culvert beneath Lampman Road, which runs parallel to Interstate 5.

Kane Creek once provided miles of fish-spawning habitat. Despite including a fish ladder, the old box culvert’s four-foot drop at the outlet remained an impediment to migrating fish most of the year.

Designed to install roughly 600 yards of well-placed rocks (large boulders to fine pebbles) as well as large root wads that mimic natural stream conditions, the current project reconstructed the channel by allowing fish to migrate to the upper reaches of the stream.

Donning hip waders and an electroshock backpack, Vogt and other ODOT staff “shocked” steelhead, salamanders and ‘muddlers’ — a finny family of fish that includes the prickly sculpin and the riffle sculpin — gently netting each one to move them downstream unharmed.

A pump and hose were used to dewater the creek. The water was moved downstream through a 250-foot pipe to allow work in the channel. According to Vogt, while the project didn’t realign the stream channel it made it more hospitable for migrating fish.

In spring 2013, the access road connecting traffic from the southbound I-5 ramps at exit 40 to Old Stage Road will undergo a full closure as the rusting culvert in Kane Creek is replaced.

ODOT met with affected residents, businesses and the local fire district to develop a construction plan that minimized traffic impacts. During the closure, local traffic will use I-5 exit 43 and Lampman and Old Stage Roads to detour around the closure.

“The project team weighed building the project under traffic with a short detour route,” said Jayne Randleman, ODOT project leader, “but that would have added months to the construction schedule. Instead, the replacement project will utilize precast girders and supports and get the road reopened in a much shorter amount of time.”

According to Randleman, this project has garnered support from the Oregon Department of Fish and Wildlife as well as local stakeholders due to its multiple benefits.

“It feels good to have a project that improves the road for drivers as well as for spawning steelhead,” Randleman said. 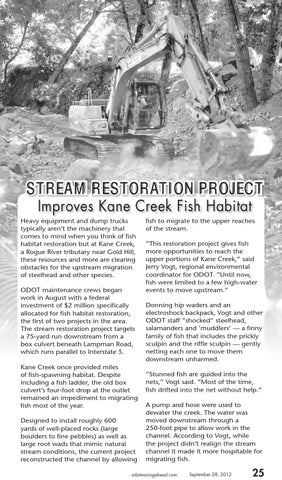