The two-year study of the Central Point interchange (Interstate 5, exit 33) is expected to be adopted by the Oregon Transportation Commission in spring 2013, according to ODOT Project Manager Allie Krull.

The Interchange Area Management Plan (IAMP) helps guide future development near the Central Point interchange area. The IAMP develops preferred alternatives and proposed access control measures with the help of local transportation stakeholders. These measures are designed to improve safety and capacity over the next 20 years.

“The IAMP evaluates the operation of the Central Point interchange and determines if there are any areas of concern, now or in the future,” said Krull. “The plan also identifies long-term needs based on planned development in the area.”

A public open house was held in November at the Central Point City Council Chambers. The presentation illustrated four major concepts that together total $5 million in improvements:

“What stands out about each of the four recommended improvements is that each one is relatively affordable,” Krull said. “Central Point stands to get a lot of bang for their buck with each project.”

Plan development included a technical advisory committee consisting of representatives from Central Point, Jackson County and the Rogue Valley Metropolitan Planning Organization. Once the plan is finalized it goes before the city and county for adoption.

“While there is no funding currently allocated for the transportation improvements identified in this IAMP, the completion of the plan itself brings these concepts much closer to reality,” said Krull. 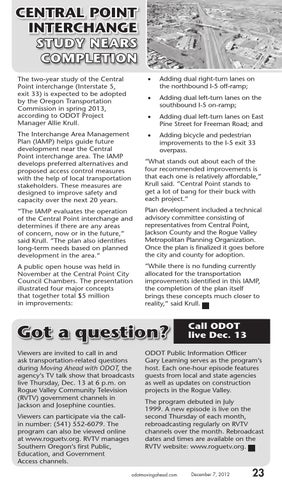