Nineteen transportation concepts that will improve safety, operations and capacity along the Oregon 140 corridor were unveiled to the public at an open house held at the White City library last November.

The study area of the Oregon 140 Corridor Plan spans from Interstate 5 exit 35 (locally known as the Seven Oaks interchange) to the Oregon 140 intersection with Brownsboro Road. Encompassing roadways traded with Jackson County in 2009, the corridor includes Blackwell Road, Kirtland Road, Pacific Avenue, Avenue G, Agate Road to Leigh Way, and east of White City to the intersection of Brownsboro Road.

“Typically, we develop concepts in corridor plans at the 10,000-foot level,” said Guevara. “This time we worked to close the gap between planning and construction.”

The Oregon 140 Corridor Plan establishes a number of traffic triggers that use real-time traffic volumes and warrants (a set of criteria which can be used to define the relative need) to select the appropriate project for funding consideration.

The large number of Oregon 140 recommendations resulted from more than 18 months of development work by the project’s Technical Advisory Committee and Citizen Advisory Committee. The two groups are comprised of private and public transportation stakeholders, including Jackson County, the City of Central Point, Amy’s Kitchen Inc., Biomass One and the Rogue Valley Transportation District.

Currently on schedule for completion in April 2013, the Oregon 140 Corridor Plan will advance forward for adoption by the Oregon Transportation Commission.

“All of our corridor plans are developed with a 20-year planning horizon,” Guevara said. “The Oregon 140 Corridor Plan is unique because the triggers we incorporated make identifying and prioritizing funding for projects much easier.” 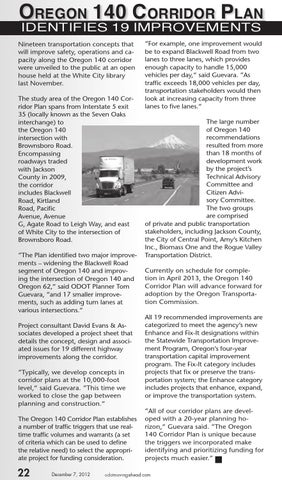