The community-based project teams overseeing the Oregon 62: I-5 to Dutton Road project are set this month to review comments made during the project’s federally-required, 45-day public comment period held earlier in September and October.

The project, formerly known as the Oregon 62 Corridor project, extends 7.9 miles from Interstate 5 exit 30 to Dutton Road. The project purpose is increasing capacity and safety on this strategic highway that connects I-5 with Oregon Highways 140 and 62.

The Draft Environmental Impact Statement (EIS) document is used to examine the impacts of the proposed multimodal solution.

“We had a nice turnout at the open house and public hearing,” said ODOT Project Leader Dick Leever. “Many people came to learn about the project and had specific questions about how construction would affect their property.

“One of the main concerns we heard was how the full project build, estimated to cost $400 million, would impact their properties.”

The project’s Citizen’s Advisory Committee and Project Development Team, which have shepherded the project since its inception in 2004, will review the public comments for inclusion in the Final EIS. Team members will then be asked whether they want to formally reaffirm earlier design alternatives.

The Citizen’s Advisory Committee and Project Development Team meet next on Wednesday, Dec. 12 from 6 to 7:30 p.m. at the Jackson County Parks Auditorium, located at 7520 Table Rock Road, in White City.

Once the project alternatives are formally chosen by the committees, they will comprise the Final EIS, which allows the Federal Highway Administration to formally approve the project.

The project’s first phase is slated for construction in 2014. The proposed 4.5-mile expressway would start at a small directional interchange from Crater Lake Highway near Whittle Road, follow the east side of the Medford Airport, pass over Vilas Road, and terminate at a traffic signal on the existing corridor near Corey Road.

The 2009 Oregon Jobs and Transportation Act invested $100 million into the Oregon 62: I-5 to Dutton Road project, which builds a four-lane expressway, along with sidewalks and transit-related enhancements, on the existing Oregon 62 corridor. 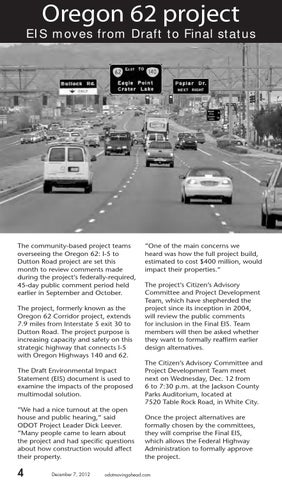