It’s been five years since Oregon concluded its groundbreaking pilot that tested the feasibility of a per-mile fee charged to drivers in lieu of the traditional gas tax. The concept was proven in that pilot – the 2007 Road User Fee Pilot Program – but several key issues had to be addressed.

“We took heed of the lessons learned in the first pilot,” said Jim Whitty, Office of Innovative Partnerships manager at the Oregon Department of Transportation.

Whitty outlined the program’s goals and mission to the Rogue Valley Area Commission on Transportation at its November meeting.

Roughly 40 volunteers are involved in the RUCPP, which runs through the first of 2013. Pilot participants chose from four plans. The first three plans are taxed at 1.56 cents per mile, approximately equivalent to Oregon’s 30-cent-per-gallon state gas tax. Gas tax paid at the pump during the pilot will be refunded or credited, based on fuel consumption reported from the vehicle or based on the vehicle’s EPA fuel efficiency rating. The four plans are:

“It’s critical that we learn what’s needed to create an open system that can adapt and change as technology and the market change,” Whitty said. 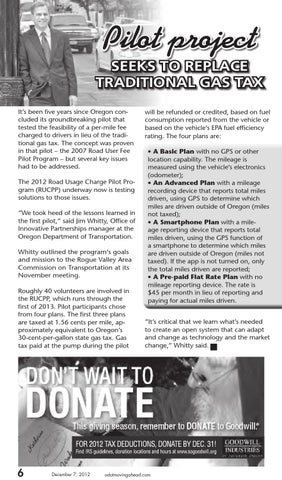