The Mill Creek Drive Bridge near Prospect hadn’t been the same since the state highway department bypassed the bridge in 1963 in favor of a new route for the Crater Lake Highway (Oregon 62).

The U.S. Bureau of Public Roads built the 157-foot structure at the ‘Avenue of the Boulders’ — where the North Fork of the Rogue River falls abruptly into the gorge — using a design created by Oregon’s famed bridge designer Conde McCullough.

The bridge was built in 1923, when the average automobile cost $393, when President Warren G. Harding resided in the White House and when the Crater Lake National Park began attracting automobile tourists from across the country.

The $1.4 million rehabilitation project on the Jackson County-owned bridge began in June 2012 with Hamilton Construction of Eugene as the prime contractor. Designed and administered by ODOT, the project slightly widened the bridge, replaced the old concrete rail and bridge deck, and added rock retaining walls to each approach, with ornamental lighted street poles that had gone missing from the original bridge.

“McCullough designed the bridge and, looking at its graceful arch design, you can see his influence so apparent on his other bridges throughout Oregon,” said Jackson County Roads and Parks Manager John Vial. “For some reason, McCullough’s original design was shelved by the state until it was picked up, modified a bit, and built by the U.S. Bureau of Public Roads.”

The Mill Creek Drive Bridge became functionally obsolete, too narrow for traffic, well before it was bypassed in 1963. White metal guardrail had been scabbed onto the deteriorating concrete rail years ago to keep motorists from crashing through the rail to the boulders and river below.

Prior to construction, Jackson County did extensive outreach in the Prospect community and with Upper Rogue tourism-based businesses. The collective response to the rehabilitation project has been very good.

“This bridge is spectacular,” said Fred Wickman, owner of the historic Prospect Hotel. “We’re excited to have it back. You just don’t see them like this anymore.”

Conde B. McCullough [1887-1946] arrived in Oregon in 1916 to teach engineering at Oregon Agricultural College (now Oregon State University). He was among a new breed of college-educated engineers, and a pioneer of the movement to create a well-planned American highway system. Beginning in the early 1900s, McCullough argued that bridges should be built efficiently, economically, and aesthetically. He became Oregon’s state bridge engineer in 1919 and initiated creation of hundreds of custom designed spans characterized by architectural elegance.

His legacy of beautiful bridges lives today and most of his bridges are considered significant landmarks. 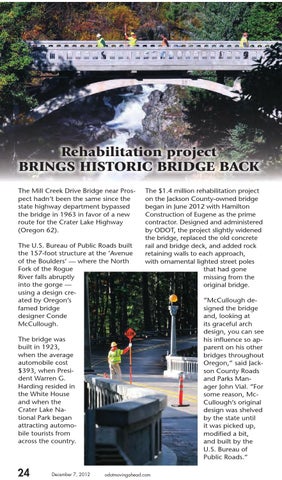