The first bicycle signal installed in southern Oregon is just one of the new features built into Ashland’s new Interstate 5 exit 14 interchange.

“Bike lanes and sidewalks were sorely needed at the overcrossing,” said ODOT District Manager Jerry Marmon, “and this project recognized that need.”

The 1960s-era bridge had been designed with just enough width to allow two vehicles to pass. Ashland’s growing population and development on both sides of I-5 necessitated a safer crossing for the community.

The Ashland Transportation Commission suggested the addition of a bicycle signal and ODOT’s state traffic engineer approved it. The Federal Highway Administration is monitoring the signal and how it functions within the interchange. A video detection system measures bike and motorized traffic.

“This signal is being successfully used in Portland, Eugene and, most recently, Salem,” said ODOT Traffic Engineer Gary Obery. “Bicyclists and drivers in Ashland need to be aware of this new signal, especially since it’s the first one in southern Oregon.”

The agency’s $1.3 billion OTIA III State Bridge Delivery Program is repairing and replacing hundreds of bridges across the state to ensure the unrestricted movement of freight and spur economic growth. Of the 365 bridges in the program, seven are currently under construction and another 264 have been completed and open to traffic. By the end of 2013, all but one project will be open to traffic.

Through 2011, the bridge program has sustained more than 17,000 jobs. Overall, the program will create or sustain approximately 23,000 jobs. 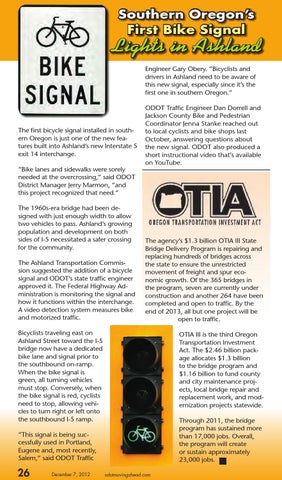