It may be the middle of winter, but Phoenix-area drivers are seeing construction activity come alive around Interstate 5 exit 24. The work underway is utility relocation—the vanguard of the Fern Valley Interchange project.

Slated for construction in summer 2013, barricades, backhoes and bucket trucks needed for the project will slowly begin to dot the landscape.

The Rogue Valley Sewer Service is already in the process of moving a sewer line along Bolz Road and Fern Valley Road. This work and more to come will affect traffic for short periods of time.

“Utility relocates are critical to the Fern Valley Interchange project,” said ODOT Project Leader Dick Leever. “As right of way files are cleared it opens the door to begin moving utilities. Power, phone and cable will be in the air on poles, followed by sewer and water in the ground.

According to Leever, the project will also remove a line of pear trees along the Grove Road alignment. During construction, the prime contractor will upgrade Phoenix’s water line as it keeps traffic moving.

“It will be quite a trick in such a tightly-developed commercial and residential interchange area,” said Leever. “Our goal is to keep impacts to a minimum.

“We will quickly and efficiently build the project in stages that keep I-5 and the local roadways open.”

The project team collaborated with a group of private contractors earlier this year to come up with the best construction methods. According to Leever, significant grade differences (the new roadway is designed to rise nearly eight feet above the current level at the top of the southbound I-5 off-ramp) and the close proximity of the new bridge ramps to the existing ramps are just a few of the major challenges the project faces.

The result of that collaborative meeting with contractors was a staged approach that sets aside a large area for unimpeded construction and builds temporary roadways and ramps, which opens up the entire project area for heavy construction.

“We’re proposing the project contractor builds temporary southbound on- and off-ramps in the southwest quadrant of the interchange area, funneling traffic into Phoenix via Luman Road,” Leever said. “However, staging proposals may be refined again when a contractor comes on board this spring.”

“The JTA investment was great news,” said ODOT Area Manager Art Anderson. “A major transportation investment like this reflects the excellent work being accomplished in the Rogue Valley.”

The $73 million Fern Valley Interchange project is on schedule to bid in April 2013.

“Between now and next spring, our staff will be meeting with the people who own, who work and who live in the affected properties around the interchange,” said ODOT Spokesman Gary Leaming. “Once we have a contractor selected, we will invite the Phoenix community to join us for a project open house.”

Leaming said his focus will be on keeping the Phoenix community informed during the two-year construction schedule.

“This will be a challenging project,” Leaming said. “We’re building new roads, new ramps and new bridges. We’re widening Highway 99. Normal routes will change until the project is complete. There will be some short closures and delays. “But we’ll do our best to minimize the impacts.”

The project’s design phase began in 2004. The Fern Valley Through design alternative was eliminated in 2009 because it would have an adverse impact on nearby farm land. Later, the Project Development Team unanimously supported the North Phoenix Through build alternative as part of the federally required environmental assessment.

The project design keeps roadways relatively untouched west of the interchange while constructing a new interchange just north of the existing one, and realigning North Phoenix Road between Home Depot and the Peterbilt shop. 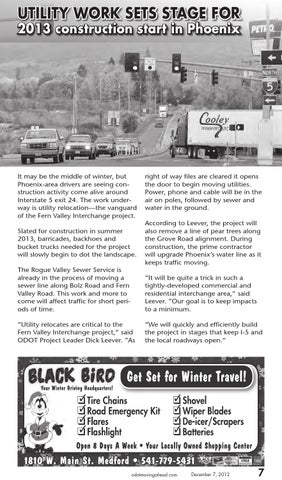