The Fern Valley Interchange project in Phoenix will reinforce the adage that timing is everything as the project team pushed the bid date back six months to the end of October with construction slated to begin in 2014.

According to ODOT Project Leader Dick Leever, the new schedule results from delays in acquiring the necessary right of way to construct a crossing diamond design interchange at Interstate 5 exit 24.

“Our property appraisers have been very busy working on other statewide projects funded by the Oregon Jobs and Transportation Act,” said Leever. “All that work has slowed up our process a bit.

“Looking on the bright side, construction bids are typically more competitive later in the year. Contractors coming off their summer construction season crunch numbers as they look forward to the next one. I expect the project will see better prices with an October bid date.”

Started in 2004, the project’s latest design leaves most roadways relatively untouched west of the interchange while constructing the new interchange just north of the existing bridge, and realigning North Phoenix Road between Peterbilt Motors Co. and Home Depot.

In the meantime, Phoenix residents will see utility relocations continue through this spring and summer.

“Utility relocates are critical to the overall project,” said Leever. “Clearing right of way files opens the door to start moving utilities. Power, phone and cable will be on poles, followed by ground work for sewer and water.”

During construction, the prime contractor will upgrade Phoenix’s water line as it keeps traffic moving. A line of pear trees along the Grove Road alignment will also be removed.

“Our goal is keep construction impacts to a minimum,” said Leever. “It will be quite a trick in such a tightly-developed commercial and residential interchange area. Our plans are to quickly and efficiently build the new interchange in stages that keeps I-5 and the local roadways open.”

The project team collaborated with a group of private contractors last year to come up with the best construction methods. According to Leever, significant grade differences (the new roadway is designed to rise nearly eight feet above the current level at the top of the southbound I-5 off-ramp) and the close proximity of the new bridge ramps to the existing ramps are just a few of the major challenges the project faces.

The result of that collaborative meeting was a staged approach that sets aside a large area for unimpeded construction and builds temporary roadways and ramps, which opens up the entire project area for heavy construction.

“We’re proposing the project contractor builds temporary southbound on- and off-ramps in the southwest quadrant of the interchange area, funneling traffic into Phoenix via Luman Road,” Leever said. “However, staging proposals may be refined again when a contractor comes on board.”

The $72 million project was fully funded thanks to a $25 million investment from the 2009 Oregon Jobs and Transportation Act, a funding package based in part on increases in truck weight-mile flat fees, registration fees, road use assessment fees, and heavy vehicle trip permit fees.

“As the project nears kick off, businesses and residents will see more of us,” said ODOT Spokesman Gary Leaming. “The big change will come once the project bids. The contractor may present an alternative construction plan to speed up the construction work.

“Once we have a prime contractor on board and our construction plans are solid we’ll host another open house for the Phoenix community to share the details.”

“The Fern Valley Interchange will be a challenging project,” Leaming said. “This project involves building new roads, new ramps and new bridges. We’re also widening Highway 99. Normal routes will change during the project and there will be some short closures and delays.

“We’ll do our best to minimize the construction impacts.”

The project’s design phase began in 2004. The Fern Valley Through design alternative was eliminated in 2009 because it would have an adverse impact on nearby farm land. Later, the Project Development Team unanimously supported the North Phoenix Through build alternative as part of the federally required environmental assessment.

The project design keeps roadways relatively untouched west of the interchange while constructing a new interchange just north of the existing one, and realigning North Phoenix Road between Home Depot and the Peterbilt shop. 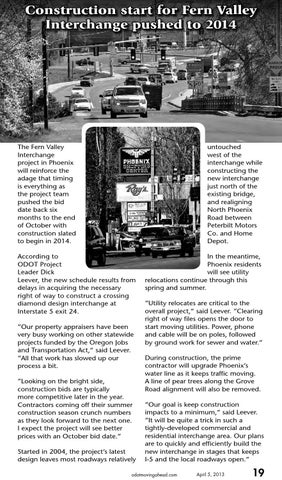