Fairgrounds Signal project scheduled to wrap up before Boatnik

Last month, ODOT removed the traffic signal in front of the Josephine County Fairgrounds, a section of the Redwood Highway notorious for a relatively high number of rear end crashes and clogging commuter, summer and holiday traffic during peak driving times. Sandwiched between Redwood Avenue and Ringuette Street in Grants Pass, the traffic signal contributed to an average of 2.5 crashes per month.

The traffic signal removal on March 4 capped more than a decade of discussions between ODOT, the City of Grants Pass, Josephine County and local takeholders.

“The Fairgrounds intersection has seen more than its share of rear-end crashes,” said ODOT Project Leader Jayne Randleman. “Traffic was very congested in the Fairgrounds area during busy travel times, partially due to its close proximity to the traffic signals at Ringuette Street and Redwood Avenue.”

The on-going project, scheduled for completion before Memorial Day, will keep traffic moving and enhance pedestrian access on the north side of Redwood Highway. Traffic will be able to turn right on either side of Fairgrounds Road and use nearby Ringuette Street or Redwood Avenue for U-turns.

Since the signals were removed, prime contractor Copeland Sand and Gravel of Grants Pass, has worked on sidewalks and new driveways for the businesses on the north side of U.S. 199, including two gas stations and a sports bar.

The Fairgrounds Signal project has been in the works for years. Initially, it was planned as a stand-alone safety project, especially when the Ringuette Street signal was installed. However, after a series of fatalities that occurred in the corridor between the South Y intersection and Midway Avenue, the Rogue Valley Area Commission on Transportation folded that project with others to secure funds for a review of the entire corridor, which began a federally-required environmental assessment.

The first two phases of the U.S. 199 Expressway project are now complete, with the last phase wrapping up last year between Rogue Community College and Dowell Road. The third phase, located in the more urban portion between Dowell Road and the South Y intersection, was shelved when the City of Grants Pass and Josephine County withdrew support.

“Copeland has the right mix of people on this job,” said ODOT Public Service Representative Dennis Steers. “The crew knows many of the business owners personally, which helps make communicating project details that much better.”

The Fairgrounds Signal project project was designed for completion by the end of May, just in time for the busy summer tourist season and the 54th Annual Boatnik, a Memorial Day Celebration in Grants Pass that features a parade and boat racing. 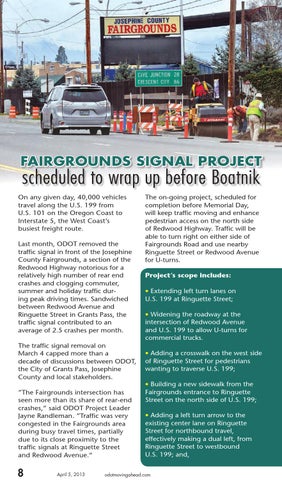