In Josephine County, where crime is rising and law enforcement funding is declining, thieves and vandals stole or destroyed more than $100,000 of maintenance equipment at ODOT facilities in Grants Pass, Hugo and Cave Junction.

“Oregonians should be upset about this situation because their tax dollars fund these facilities,” said ODOT Grants Pass Maintenance Manager Shawn Stephens.

ODOT reported each incident of theft and vandalism to law enforcement officials in Josephine County. ODOT took additional steps to secure equipment and buildings but the criminal activity has grown over the past twelve months. Since last summer, ODOT maintenance facilities in Grants Pass, Hugo and Cave Junction have all been broken into and vandalized on multiple occasions.

“We’ve experienced more than $100,000 of items stolen or broken since last summer,” said Stephens. “That’s money that we won’t be able to invest on the highways. We’re forced to redirect funds to replace or fix the buildings, tools and vehicles our crews rely upon to keep the roads safe.”

At ODOT’s Hugo yard, criminals preyed on a utility truck used by the agency’s electric crew, stealing the battery, electrical tools (many employee-owned) and cutting the truck’s fuel line. Two trailers, one owned by a contractor working on the Interstate 5 truck climbing lane project, were burglarized as well. Thieves also grabbed a portable message board and backhoe along I-5 near Hugo.

“There isn’t a single piece of equipment regardless of its size that hasn’t been targeted in Josephine County,” said Stephens. “We had a 500-foot section of guardrail stolen from a frontage road in Sunny Valley. That cost about $50,000 to replace.

“We’ve tried to make it harder for thieves. We bent the bolts on the guardrail but the thieves just threw a chain around the posts and pulled the whole thing out.” 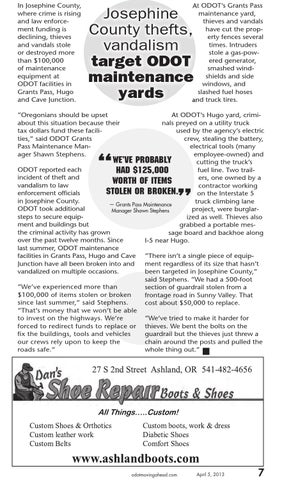