One hundred years ago Oregonians created their own State Highway Department under the slogan, “Getting Oregon Out of the Mud.”

The Oregon Legislature appropriated $10 million for the transportation agency to organize and fund operation expenses. The necessity for transportation investment was clear: Oregon in 1913 contained 25 miles of paved roads and 14,000 automobiles. Muddy trails that served horse-drawn wagons and stagecoaches were not sufficient.

Counties were responsible for improving their main highway routes; the department assisted in surveying and engineering construction operations. Construction of the Pacific Highway began in Jackson County.

That same year, in a speech to the Oregon Legislature, Governor Oswald West proclaimed ocean beaches, from Columbia River to the California state line, public highways. The prudence being beaches would provide the public with miles of highway without the cost of construction to the public.

Today, ODOT is one of the largest state agencies in Oregon with about 4,500 full-time employees and a biennial budget of $3.8 billion. The agency manages highways and bridges, provides driver and motor vehicle services, regulates the trucking and rail industries, supports public transit services, and promotes safety in all aspects of every portfolio.

To highlight its 100th anniversary, ODOT released a video on YouTube that features Oregon’s master bridge builder, Conde B. McCullough. The video was produced and shot by ODOT Spokesman Peter Murphy and Videographer John Kazmierski produced and shot the video, which features some of the West’s most beautiful and functional bridges

Filmed over two weeks, the video combines scenes of the bridges today with historic video and photographs and tells the story of McCullough and his vision for the bridges he and his team designed.

“Conde McCullough was in the right place at the right time to build these magnificent structures,” Murphy said. “There have been a lot of words written about him and his contributions to the Oregon Department of Transportation, so I’m pleased to be able to bring his vision to life in this video.”

Conde B. McCullough [1887-1946] arrived in Oregon in 1916 to teach engineering at Oregon Agricultural College (now Oregon State University). He was among a new breed of college-educated engineers, and a pioneer of the movement to create a well-planned American highway system. Beginning in the early 1900s, McCullough argued that bridges should be built efficiently, economically, and aesthetically. He became Oregon’s state bridge engineer in 1919 and initiated creation of hundreds of custom designed spans characterized by architectural elegance.

His legacy of beautiful bridges lives today and most of his bridges are considered significant landmarks.

The culmination of McCullough’s career in Oregon was the design of five existing major bridges along the Oregon Coast Highway — the Yaquina Bay Bridge at Newport, the Isaac Patterson Bridge at Gold Beach, the Siuslaw River Bridge at Florence, the Umpqua River Bridge at Reedsport, and the Conde McCullough (formerly Coos Bay) Bridge at Marshfield/North Bend. These five bridges and seven others are listed on the National Register of Historic Places. McCullough had also designed the Alsea Bay Bridge at Waldport, but his original bridge has been replaced by a modern span. 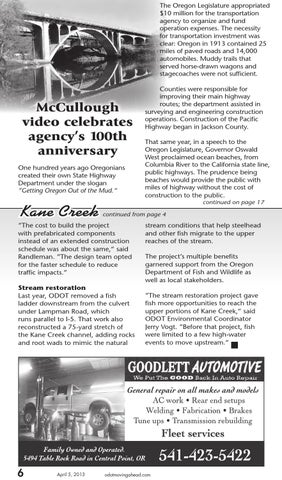