Just off Interstate 5 exit 40, the Kane Creek culvert runs beneath a short access road that connects the southbound I-5 ramps to Old Stage Road, a fitting name as it is one of the oldest roads in the Rogue Valley.

Prime contractor Carter and Company of Salem will replace the rusting culvert with a new bridge of prefabricated components. This is the second of two state projects involving Kane Creek. The first project removed an obsolete fish ladder and improved a section of stream habitat.

“This is an instance where you think you’re just driving down the road and don’t realize you’re driving over a waterway, in fact a stream that’s critical fish spawning habitat,” said ODOT Public Service Representative Dennis Steers.

The ODOT project team examined different approaches to replace the culvert, including whether to build a temporary detour structure and roadway or use an extended closure of the connector road.

“We considered construction under traffic with a short detour route,” said ODOT Project Leader Jayne Randleman, “but that would’ve added months to the construction schedule.”

The culvert replacement project will use precast girders and supports instead, allowing the road to reopen in a shorter amount of time. During some short-term closures, traffic will be directed to use either I-5 exit 43 to enter Gold Hill or use Lampman Road to connect to Old Stage Road, Dardanelle’s Market, and through to Jacksonville.

ODOT met with affected residents, businesses and the local fire district in developing the construction plan. “The cost to build the project with prefabricated components instead of an extended construction schedule was about the same,” said Randleman. “The design team opted for the faster schedule to reduce traffic impacts.”

Last year, ODOT removed a fish ladder downstream from the culvert under Lampman Road, which runs parallel to I-5. That work also reconstructed a 75-yard stretch of the Kane Creek channel, adding rocks and root wads to mimic the natural stream conditions that help steelhead and other fish migrate to the upper reaches of the stream.

The project’s multiple benefits garnered support from the Oregon Department of Fish and Wildlife as well as local stakeholders. 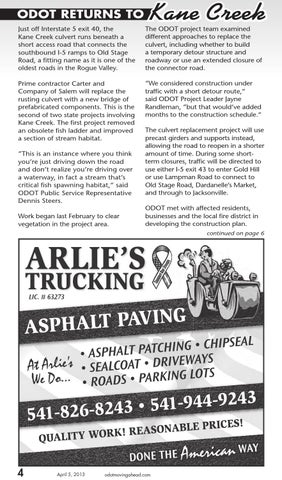