ODOT is focused on completing a federally-required Final Environmental Impact Statement that is necessary before construction can begin on the first two phases of the Oregon 62: I-5 to Dutton Road project.

The project’s first phases are slated for construction in 2015. The 4.5-mile expressway would start at a small directional interchange near Whittle Road, follow the east side of the Medford Airport, pass over Vilas Road, and connect back to the Crater Lake Highway near Corey Road.

One of the biggest features of the Oregon 62: I-5 to Dutton Road project will be the construction of a four-lane, access-controlled expressway. The expressway would provide faster travel and improved safety within and throughout the region.

The addition of sidewalks and transit-related enhancements are planned on the existing Oregon 62 corridor.

The Citizen’s Advisory Committee and Project Development Team shepherded the Oregon 62: I-5 to Dutton Road project since its inception in 2004. ODOT, the Federal Highway Administration, stakeholders, regulatory agencies, and the public worked together to develop the build alternatives.

The PDT included representatives from ODOT, the City of Medford, Jackson County, the Rogue Valley Metropolitan Planning Organization, the Jackson County/Medford Chamber of Commerce, the freight and trucking industry, FHWA, the CAC, and two citizens-at-large. The team is responsible for management decisions, technical quality and assisting in the successful development of the project.

The CAC comprised representatives of neighborhoods, businesses, and community interests. These members represent disciplines such as bicyclists, pedestrians, transit, agriculture, environmental issues and other interests.

ODOT also conducted other outreach efforts as part of the process, including public workshops.

According to Leever, one of the main concerns heard was how the full project, estimated to cost $400 million, would impact individual properties.

“The response from the public was very good at the project’s open house and public hearing last year,” said Leever. “Many people learned what the project is designed to solve and asked specific questions about how construction would affect their property.”

FHWA will make the final decision on the build alternatives through the National Environmental Policy Act process, which helps decision-makers evaluate project alternatives. NEPA, enacted in 1970, requires disclosure of the environmental impacts of federally-funded projects and opportunity for public comment.

“Giving citizens, stakeholders, and public agencies the opportunity to review and comment on the proposed project is a vital part of the NEPA process,” said Leever. 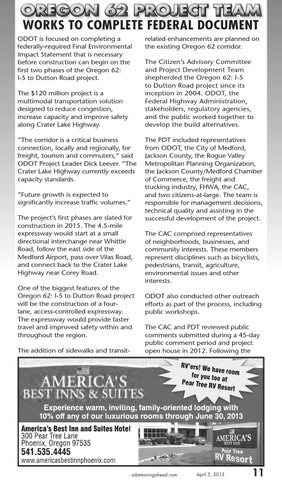