The Economic Case for Electric Vehicles By Art James

In the summer of 2008, the price of regular gasoline exceeded $4 per gallon in Oregon for the first time in history.

I work in ODOT’s Office of Innovative Partnerships where we have a unique statutory authority to enter into public/private partnerships for transportation projects. The phone rang and it was a fleet operator in the Portland area who said the fuel prices were going to put him out of business. He was thinking about converting to electric drive vehicles, but was concerned about their range and not having places around the community to charge them. He had heard about the Innovative Partnerships program and wondered if we could use that authority to install charging stations around Oregon.

This started a process where ODOT began to take an active role in facilitating deployment of electric vehicle charging stations. The first-ever statewide request for proposal for EV-charging equipment was issued in 2009 and a subsequent RFP for fast chargers went out in 2010. We obtained an American Recovery & Reinvestment Act ARRA grant of nearly $1 million in 2010 to install fast chargers along Interstate 5 in southern Oregon and an additional $3.4 million from the U.S. Department of Transportation in 2011 to put chargers along the coast, out in the Columbia River Gorge and over the Cascades.

A remarkable transformation has taken place since these early efforts. Oregon has over 800 charging stations in operation and more are being installed daily. More than 2,000 plug-in EVs are driving on Oregon roads and the rate of adoption is outpacing hybrids when they were first introduced over a decade ago. EV Charging facilities are popping up at malls, grocery stores, restaurants, theaters and even at ODOT office buildings!

For some people, the argument for EVs is all about reducing greenhouse gas emissions. Nissan made a classic TV ad for the LEAF that featured a polar bear who leaves a melting iceberg to go to the city and give the owner of a Nissan LEAF a hug. While I get this, what has kept me working on this for the last five years is the economic impact the transition from imported fossil fuels to domestically produced electricity will have on this state.

Oregonians spend more than $8 billion every year on gasoline and diesel. Since there is no production or refinement in this state, all of that money leaves the state, some of it even going to countries that don’t like us very much. If we can convert a significant portion of our transportation fuel from petroleum to electricity, that will all be money that will stay in Oregon to grow the economy and create jobs. That argument to me is like mom, apple pie and the flag.

And for consumers, consider that if you drive a car that gets 20 miles per gallon and gas costs $4 per gallon, you are paying 20 cents for every mile driven in fuel cost alone. In an EV, that same mile is going to cost you 1-2 cents per mile. That’s nearly a 20-to-1 cost reduction per mile just for fuel. EVs also have almost no maintenance costs so the total cost of ownership can be far below what an internal combustion engine vehicle costs.

My wife took the plunge in May 2012 and has over 4,000 miles on her EV – and hasn’t been to a gas station since. At the same time our monthly electric bill has only gone up about $8 per month compared to the $65-$75 per month she was paying to fuel her last car. The transition has been a no-brainer for us.

Art James joined ODOT’s Office of Innovative Partnerships in 2004 as project director. He has been instrumental in launching Oregon’s public/private initiative and key in helping establish Oregon as a leading launch site for electric vehicles. He works with private sector firms to create a robust network of EV charging infrastructure in Oregon and encourage rapid adoption of electric transportation. He also chairs the West Coast Electric Highway Steering Committee, working with utilities and local governments to install of EV charging stations around the state.

Art holds a Bachelors degree from Stanford University and a Master of Business Administration in finance from the University of Oregon.

Road Usage Charge Pilot Program — Oregon leads the nation in researching ways to ensure motorists driving fuel efficient vehicles support the roads they travel. The Road User Fee Task Force, passed by the 2001 Oregon Legislative Assembly, was created to “develop a revenue collection design funded through user pay methods, acceptable and visible to the public, that ensures a flow of revenue sufficient to annually maintain, preserve and improve Oregon’s state, county and city highway and road system.” In the past decade, the task force researched and investigated more than two dozen options, and after deciding a road user fee had the most promise, spearheaded a successful pilot in the Portland area that concluded in 2007. In late 2012, the Oregon Department of Transportation, as directed by the Oregon Legislature, began a second road user fee pilot.

Road User Fee Task Force — The Oregon Legislature created the Road User Fee Task Force to investigate options the state might have for creating a sustainable way to generate funds to support the transportation system. After in-depth research and exploration of options, the group spearheaded two pilot projects and continues regular meetings to keep Oregon leading the way on an issue of concern to other states, the federal government and other countries as well.

The focus now is on how to generate revenue the state is not getting due to the increasing popularity of highly fuel efficient and electric vehicles. While these vehicles contribute positively to our environment and to reducing our dependence on fossil fuels, they still use roads without contributing, or contributing very little, to the costs of maintenance and operation.

Solar Highway — The Oregon Solar Highway Program and its projects seek to further the usage and understanding of solar energy’s role in greening the nation’s grid, adding value to the existing public right of way, and supplying clean, renewable, home-grown energy to Oregonians. The program is also interested in helping other states develop and implement their own solar highway programs, further supporting solar energy across the nation.

Electric Vehicle Charging Network — ODOT supports several projects around the state focused on EVs and EV infrastructure, including the following:

These and future projects are helping Oregon create a sustainable transportation system by reducing the state’s reliance on imported petroleum and by reducing greenhouse gas emissions. 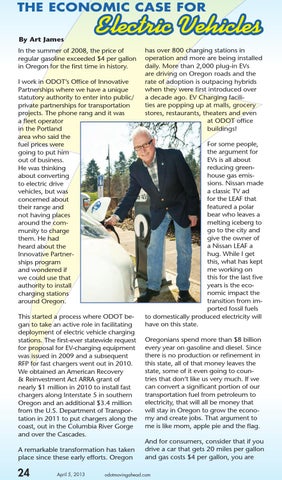