The new Kane Creek Bridge opened to traffic in mid-July, following 10 days of round-the-clock construction. More important, the bridge opened minutes ahead of a promise to area businesses during the summer tourism season.

“We made a commitment at our open house last spring to the businesses and nearby residents,” said ODOT Public Information Officer Gary Leaming. “It just felt good to deliver on the promise to them.”

Prime contractor Carter and Company of Salem replaced the rusting culvert with precast girders and bridge supports to expedite construction.

The construction milestone included the reopening of the Interstate 5 ramps at exit 40 near Gold Hill and a short access road that connects the southbound I-5 ramps to Old Stage Road.

The first phase of construction last May included a four-day closure to drive pile and take measurements for the precast girders and bridge supports.

The ODOT project team examined different approaches to replace the culvert, including whether to build a temporary detour structure and roadway or use an extended closure of the connector road. 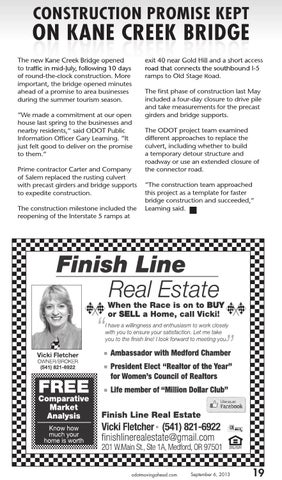