With the Fern Valley Interchange project bid opening scheduled for October, utility and right of way work continues at a brisk pace around the Interstate 5 exit 24 interchange in preparation for the $72 million project.

“Utility companies have been working since last spring to clear the way for the impending road construction,” said Dennis Steers, ODOT’s public service representative. “Some utility lines are being buried and some lines are being relocated above ground.

“The utility work may look and feel like the larger project but you haven’t seen anything yet. Building a new interchange will require at least two full construction seasons, so motorists need to continue to be patient and aware as they drive through the project area on I-5, Oregon 99 and Fern Valley Road.”

Connecting I-5 and Phoenix, the Fern Valley interchange has its share of traffic congestion, which is especially severe during the morning and evening commutes. Development, both existing and proposed, along the east side of the interstate in Phoenix has reduced the capacity and safety at the interchange.

Earlier this year, the design team pushed the Fern Valley Interchange project back six months due to delays in acquiring the necessary right of way to construct a crossing diamond design for the new exit 24 interchange.

“We’re not happy about the delay but, on the bright side, we expect to see more competitive bids in October than we would have opened at the beginning of the summer,” said ODOT Project Leader Dick Leever. “Contractors coming off a summer construction season tend to crunch numbers harder as they look forward to the next construction season.

“I expect the competition to submit better numbers in October.”

The project’s design leaves most nearby roadways west of the interchange relatively untouched while constructing the new interchange at a location just north of the existing bridge.

Vehicles crossing the interchange move to the opposite side of the road to either enter I-5 or to cross it, reducing the number of signal cycles for traffic to clear.

The project will also realign North Phoenix Road between Peterbilt Motors Co. and Home Depot. The prime contractor will also be tasked with keeping traffic moving while upgrading the water line for the city of Phoenix.

The project team collaborated with a several of private contractors in 2012 to develop construction methods best suited for the challenges ahead of this project, such as the close proximity of the new bridge ramps to the existing ramps. According to Leever, significant grade differences are in store for the winning prime contractor. The new roadway is designed to rise nearly eight feet higher than the current level at the top of the southbound I-5 off-ramp.

“We’re proposing the project contractor builds temporary southbound on- and off-ramps in the southwest quadrant of the interchange area, funneling traffic into Phoenix via Luman Road,” Leever said. “However, there are still some details to work out. Staging proposals may be refined yet again once a contractor comes on board.”

“Reducing congestion during construction will be quite a trick in such a tightly-developed commercial and residential interchange area,” Leever said. “Our plans call for stages to quickly and efficiently build the new interchange while keeping I-5 and the local roadways open at the same time.”

“As the project nears its official kick off, businesses and residents will see more of us,” said ODOT Public Information Officer Gary Leaming. “Once we have a prime contractor on board and our construction plans are solid we’ll host another open house for the Phoenix community to share the details.”

“Of course, another one of our major project goals is to keep construction impacts to a minimum,” said Leaming. “We are planning a significant media campaign to reach out to commuters and encourage them to use alternate routes and adjust their travel plans to avoid the busiest times of the day.

Aesthetic features inspired by the natural colors surrounding Phoenix — the hills and grasses — are incorporated in the final design for the new Fern Valley Interchange project. The use of concrete form liners and different stains and paints presented opportunities to design a bridge with a local look instead of the drab concrete structures commonly built when I-5 was first constructed.

The project team filtered through several designs with the help of Medford landscape architect John Galbraith, before selecting aesthetics for the Fern Valley Road bridges that span I-5 and Bear Creek at exit 24.

A $25 million investment from the 2009 Oregon Jobs and Transportation Act was the last key to fully funding the Fern Valley Interchange project. The JTA was a funding package based in part on increases in truck weight-mile flat fees, registration fees, road use assessment fees, and heavy vehicle trip permit fees.

The Phoenix Planning Commission and Phoenix City Council approved an Interchange Area Management Plan for I-5 exit 24 back in 2009. The IAMP is a requirement of the Oregon Transportation Commission, which sets policy for ODOT.

The IAMP is a planning document that examines future development near the interchange while also protecting the public’s investment in the roadway system. IAMPs coordinate current and future land uses and transportation improvements to ensure the safe and efficient movement of people and goods to, through, from, and within the area.

“The IAMP protects the interchange further into the future, ensuring the area won’t get bogged down by traffic because of overdevelopment,” said Leever. 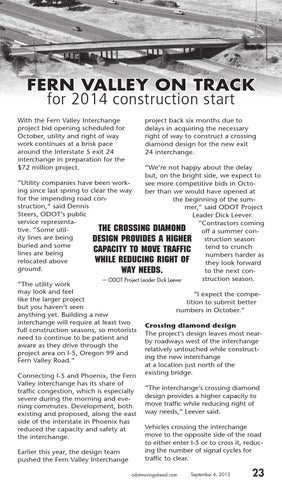