I-5 construction on Sexton could finish by year end

Rock blasting and rolling slowdowns wrapped up last July as prime contractor Knife River Corporation focused the rest of the summer on repaving 17 miles of Interstate 5 and addressing other safety improvements included in the $28 million construction project.

According to ODOT Project Manager Ted Paselk, the construction work is moving along smoothly. The project could be completed by the end of 2013.

“To speed up construction we allowed Knife River to close the northbound slow lane at night,” Paselk said. “The temporary refuge allowed dump trucks to move in and take material directly from the front end loaders working behind the protected concrete barrier.

“If the schedule holds, we’re looking to wrap before winter.”

In addition to new pavement and new striping from Hugo north to Glendale, the project will improve southbound curves located south of Smith Hill and will add a northbound climbing lane for commercial trucks, which are notorious for a slow climb over Sexton Mountain.

The 12-foot truck climbing lane extends about 2.8 miles, starting as an extension of the northbound on-ramp at the Hugo (exit 66) interchange and ending just beyond the crest of the Sexton Mountain pass. The climbing lane replaces the former shoulder; a new 10-foot shoulder is being built to the right of the truck climbing lane.

ODOT used rolling slowdowns to keep traffic moving during the blasting stage earlier this summer. Pilot vehicles slowed I-5 traffic to roughly 30 miles an hour from both Glendale and Rogue River. I-5 on-ramps in the project area were also temporarily closed during the rolling slowdowns.

“The rolling slowdowns gave Knife River about 20 minutes to blast and clean up any rock that blows onto the highway,” Paselk said.

Climbing lane construction required closing the I-5 emergency shoulder and placing concrete barriers to separate traffic from the construction work.

“This summer it has taken a little more time to travel through this stretch of I-5,” said ODOT Project Information Specialist Dan Latham. “There’s been a lot of construction activity. Drivers still need to keep an eye on the traffic flow. Watch for slow-moving vehicles and quick lane changes.”

According to Paselk, an estimated 250,000 cubic yards of soil and rock are being moved to clear room for the new northbound truck climbing lane.

Some of the steepest grades on the Interstate Highway System are located on I-5 in southern Oregon.

Commercial trucks have used the I-5 shoulders, designed to provide a safe refuge for disabled vehicles, to navigate southern Oregon’s mountain passes. Trucks using the shoulder cause significant damage that requires frequent repair.

“Southern Oregon’s mountain passes are a weak link on the corridor,” said ODOT Project Leader Mark Leedom, who managed design for the I-5: Glendale to Hugo Paving & Sexton Climbing Lane project. “On each steep climb, trucks slow down in the outside lane, which results in immediate congestion on the pass, increasing the possibility of crashes.”

While most freeway climbs are built on grades of 5 percent or less, the northbound I-5 lanes on Sexton Mountain present a 6.13-percent grade. Trucks frequently slow to less than 30 mph during the climb. The speed difference relative to other traffic can be hazardous.

“The Federal Highway Administration identified that some of the worst truck bottlenecks in the nation are caused by steep grades on I-5 in southern Oregon.”

The new climbing lane is expected to reduce the frequency of I-5 closures related to commercial trucks, especially during winter driving conditions. The new climbing lanes are being built to today’s engineering standards, thereby reducing the need for ongoing shoulder maintenance.

Over the past couple of years, ODOT added three short climbing lanes, each roughly one-mile long, on I-5 in Douglas County. The truck climbing lanes are located southbound at Rice Hill (milepost 147) and one in each direction on ‘Gumby Hill’ (milepost 137), the steep grade between Sutherlin and Oakland.

Climbing lanes are also located further north on I-5 (a three-mile section south of Salem) and on Interstate 84 (a seven-mile section east of Pendleton).

More truck climbing lanes in southern Oregon are being considered, although no projects are currently funded. 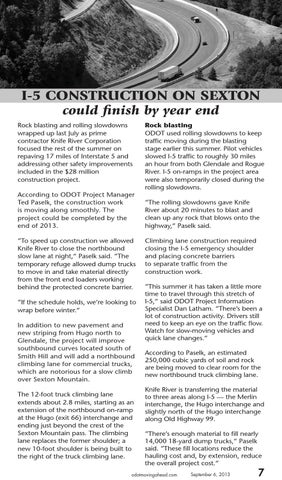