Moving Ahead "The Reality" By John Watt

Perhaps you have heard about the Hyperloop system that is being developed to move people across the country at an astounding 800 mph. In China, the Maglev train moves people from downtown Shanghai to the airport at an unbelievable 268 mph today. Now that is moving ahead.

In the U.S. today, we are not moving quite so fast…yet. In 1903, Henry Ford rolled out his first car that had a top speed of 28 mph and drove on makeshift dirt roads. Since that time, the U.S. has developed over 47,000 miles of interstate highway systems, in addition to state and local highway and road systems. With the government and consumers demanding more clean fuel-efficient vehicles an imbalance is created in highway funding. Today’s more efficient cars and trucks are paying lower fuel taxes while wear and tear on the roads is the same or worse because of more vehicles and drivers.

As Jackson and Josephine counties continue to see more people relocating to our beautiful part of the state, more cars and drivers are taking to the roads. Since 1999, we have some 23,000 more drivers on the roads and highways in Jackson and Josephine counties alone. In addition to an increase in auto traffic, we should expect to see a marked increase in the number of trucks hauling freight to and from our community. All of these things create strain on a system that is critical to you, the reader. Investment in our roads is failing. While the country has relied on dedicated funding through gas taxes and vehicle fees, it can no longer count on a level of funding that will match the need. President Obama has asked to Congress to pass one time funding for infrastructure, which so far has been rejected. Even then, a sustainable funding system must be developed and approved by Congress. Public, private partnerships is another option that could be pursued. This option comes with many challenges but is certainly a worthwhile alternative.

Another looming issue that policymakers and planners must consider is the reality of a coming seismic event. Scientists tell us that our region experiences major earthquakes every 300 years or so. That is, apparently at hand. If a major seismic event were to happen today, there is a very real possibility of major bridge collapses over I-5 from Southern California to the Canadian border. We don’t have to travel very far to see the viaduct that spans the city of Medford. Given the age and condition of the viaduct, estimates could see a major failure, if not an outright collapse of the entire structure. The community and ODOT must begin planning now to alleviate potential isolation from the rest of the state when the predicted earthquake occurs.

As you can see from the other reports in this issue, good things are being built or upgraded on roads and highways throughout our region. Temporary inconveniences and long waits and backups lead to better and safer ways to move around Jackson and Josephine counties and the rest of the state. A continual reminder is that these projects require years of planning leading to months of construction. All of this takes investments on the part of the users of the system. In order to continue moving ahead, remember the realities that go along with building and maintaining our road and highway system. Whether investments continue to be totally funded by the government or whether partnerships can be developed with private investors, something MUST be done so that we all may enjoy traveling on Oregon’s roads and highways.

John Watt is a native Oregonian, born and raised in Lebanon, Oregon. He relocated to the Rogue Valley in 1982 with the Fred Meyer organization. In 1990, John was elected to the first of four terms as the State Representative for House District 50.

Appointed Majority Whip in 1993, and serving on a variety of committees including Commerce, Energy and Environment, Information Management, Transportation, and Economic Development and chairing Labor, Rules and Reorganization, Revenue and serving on Ways and Means for four years, John has had a major role in shaping state policy for Oregon. He continues his involvement with state government through the Government Relations Company he and his wife started in 1999.

John has been active in his community serving in many capacities. He has served as a Board Member and Past President of ACCESS, Inc.; as a board member of Dogs for the Deaf, Oregon Community Foundation – Southern Oregon Leadership Council, Bennett Scholarship Fund and the SMART Reading Program as well as through regional organizations such as the Oregon Highway Users Association, the State Road User’s Fee Task Force, Transportation Advocacy Committee (TRADCO), and as a member of the Medford/Jackson County Chamber Of Commerce.

John is a Paul Harris Fellow and is past president of the Medford/Rogue Rotary Club. With his wife Cathy, he enjoys golfing, reading, and spending time with his three daughters and grandchildren. 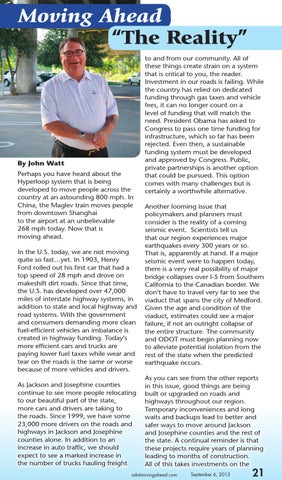