The 3.6-mile section of Oregon 62 between Linn Road and Oregon 234 is getting an extreme makeover, a figurative facelift that includes widening, paving and the construction of a continuous, two-way, left-turn lane from Crystal Drive to Rolling Hills Drive.

“Both the highway widening and the addition of a continuous, two-way, left-turn lane will improve safety,” said ODOT Public Information Officer Gary Leaming. “This project provides a turning refuge from Crystal Drive to Rolling Hills Drive.”

After a flurry of utility relocations last spring and early summer, prime contractor Oregon Mainline of McMinnville switched to nighttime construction following the Fourth of July holiday weekend to reduce the impacts during the busy summer tourism season.

“Traffic is heavy on this section of highway, especially during the summer, so we limited work in the travel lanes to only at night,’ said ODOT Public Service Representative Dennis Steers.

Earlier this year, the ODOT project team briefed the Eagle Point City Council. The project received an exception to the city’s noise ordinance. Much of the construction work is conducted at night, from 7 p.m. to 7 a.m., to reduce the impact on summer traffic and speed up the construction schedule.

The project is scheduled for completion in October. Other construction work scheduled in this project includes: 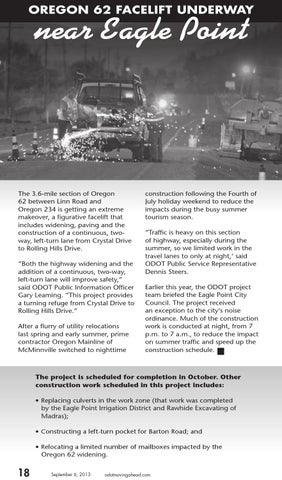