Right of way negotiations for construction easements along Crater Lake Highway — from Poplar Drive to Delta Waters Road — are at the heart of the current behind-the-scenes preparation for the Oregon 62 Expressway project.

“The right of way work is not as visible as construction work but it is no less important to the overall project,” said ODOT Project Leader Dick Leever. “Even though a lot of the right of way along the Oregon 62 corridor is owned by our agency, there are gaps.

“Our right of way agents are meeting with local property owners to secure the additional easements we need to provide the construction contractor room to work.”

The corridor is a critical business connection for freight, tourism and commuters.

“Oregon 62 and Delta Waters Road is the busiest intersection in the entire southwest Oregon region,” said Leever. “The traffic counts are higher than those at I-5 north of Medford.”

The $120 million multimodal project is designed to increase capacity and improve safety along the Oregon 62. The highway exceeds capacity standards and future growth is expected to significantly increase traffic volumes.

The first construction phase is slated to begin in 2014.

According to Leever, the most challenging segment during the first construction phase is located where traffic already runs heavy, between Poplar Drive and Delta Waters Road. ODOT plans to take advantage of a wide section of its own right of way on the south side of that highway section.

“Project staging is crucial to keep traffic moving and business accesses open,” said Leever. “Much of the first-phase work will be completed at night or behind solid barrier to limit the impacts to traffic.”

Leever said the major concern he heard during the project’s public outreach period was how the entire project (estimated at $400 million) would impact individual properties along Oregon 62.

“Both the northern portion of the corridor from Corey Road to Dutton Road and the southern portion from I-5 to Poplar Drive are planned for future construction,” Leever said.

The 2009 Oregon Jobs and Transportation Act invested $100 million into the first two phases of the project. No funding is currently programmed for future phases.

“Given the transportation budgets we currently face and the near-term forecast, we’re really thankful to have the funds to begin construction,” said Leever. 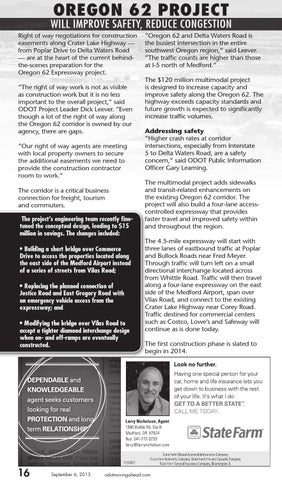