Curtain rising on two busy years of construction in Phoenix

Big news for the Fern Valley Interchange project in Phoenix is the release of a new traffic simulation video and an apparent low bidder — Hamilton Construction of Springfield — for the two-year construction project. There’s a flurry of activity as vegetation is cleared and utilities are moved in preparation for a 2014 start of interchange construction.

The $72 million Fern Valley Interchange project will address Phoenix’s Interstate 5 interchange. Traffic congestion is especially severe during the morning and evening commutes. Existing and proposed development along the east side of I-5 in Phoenix has reduced the capacity and created safety issues at the interchange.

The project area includes I-5, Oregon 99 and Fern Valley Road. The work currently underway is highly visible. Trees and brush in the project area are being cleared in preparation for construction. Utility companies are setting new utility poles, stringing line and drilling new gas lines.

“It looks, feels and sounds like highway construction,” said ODOT Public Information Officer Gary Leaming, “and, technically, it is. Really, though, it is just the opening act for two busy years.”

ODOT pushed the bid date from last spring to November as right of way and design issues delayed the project. According to ODOT Project Leader Dick Leever, one of the benefits of the delay was more competitive bids. Six of the contractors that attended a pre-bid meeting in September ultimately filed a bid on the project. Hamilton Construction of Springfield is the apparent low bidder. The contractor will be formally selected before work can begin in the new year.

“Fall bid openings are typically more competitive and we get better prices than we would’ve seen in the spring,” said Leever. “Contractors coming off a summer construction season tend to crunch numbers harder as they look forward to the next construction season.”

Vehicles crossing the interchange move to the opposite side of the road to either enter I-5 or to cross it, reducing the number of signal cycles for traffic to clear.

The project will also realign North Phoenix Road between Peterbuilt Motors Co. and Home Depot. The prime contractor will also be tasked with keeping traffic moving while upgrading the water line for the city of Phoenix.

New interchange video
A frequent question from local drivers and Phoenix residents, including stakeholders who have followed the project’s long development process, is: How will drivers negotiate the new interchange design?

According to Leaming, the project’s 3-D traffic simulation shows how the new interchange will operate. The simulation was completed last September.

“We try to answer some of the most pressing questions about the Fern Valley Interchange project, but there is nothing like letting people watch it themselves; they can see what it will look like and how to drive the new interchange,” said Leaming.

The video is available online at the project website.

Collaboration with private contractors
The project team collaborated with several private contractors in 2012 to develop construction methods best suited for the challenges ahead of this project, such as the close proximity of the new bridge ramps to the existing ramps. According to Leever, significant grade differences are in store for the winning prime contractor. The new roadway is designed to rise nearly eight feet higher than the current level at the top of the southbound I-5 off-ramp.

“We’re proposing the project contractor build temporary southbound on- and off-ramps in the southwest quadrant of the interchange area, funneling traffic into Phoenix via Luman Road,” Leever said. “However, there are still some details to work out. Staging proposals may be refined yet again once a contractor is formally selected.”

“Reducing congestion during construction will be quite a trick in such a tightly-developed commercial and residential interchange area,” Leever said. “Our plans call for stages to quickly and efficiently build the new interchange while keeping I-5 and the local roadways open at the same time.”

Sharing information key to project success
“As the project nears its official kick off, businesses and residents will see more of us,” said Leaming. “Once we have a prime contractor on board and our construction plans are solid we’ll host another open house for the Phoenix community to share the details.”

“Of course, another one of our major project goals is to keep construction impacts to a minimum,” said Leaming. “We are planning a significant media campaign to reach out to commuters and encourage them to use alternate routes and adjust their travel plans to avoid the busiest times of the day.

TripCheck cameras will capture Phoenix traffic
Project plans are in place to have at least two new cameras keeping an eye on construction-related traffic once the Fern Valley Interchange project begins.

“We’re installing traffic cameras to help people navigate the area,” said Leaming. “There will be congestion during construction. These cameras will help commuters and other local drivers see the conditions and consider other routes.”

The first TripCheck camera will be placed near the existing Fern Valley Road overpass. The second will be placed on the variable message sign bridge that spans I-5 roughly one mile north of the Phoenix interchange.

Plans are to have both cameras operational prior to the first major construction stage, which involves excavation of a drainage pipe across I-5. That work will require a month of single-lane closures on I-5 either late in winter or early spring 2014.

“TripCheck cameras were invaluable during the South Medford Interchange project,” Leaming said. “These new cameras in Phoenix will also give drivers a first-hand look at the congestion during construction.” 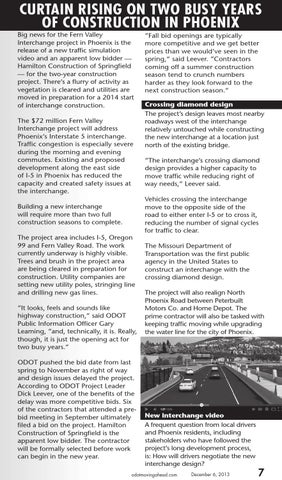