By late last summer, the most visible work — excavation and rock blasting to construct a new, northbound Sexton Mountain truck climbing lane — had wrapped up, allowing prime contractor Knife River Corporation to transition into paving and striping work and making safety improvements along the project’s 17-mile stretch of I-5 from Hugo north to Glendale.

“Erosion control and the draping of the rockfall screens across the slope took us into late autumn,” said ODOT Project Manager Ted Paselk. “We’ve adjusted the concrete barrier and completed storm water drain inlets in the project area.”

Weather-sensitive bridge deck treatments near Sunny Valley are scheduled for completion in summer 2014.

Rock blasting
ODOT used rolling slowdowns to keep traffic moving during the blasting stage last summer. Pilot vehicles slowed I-5 traffic to roughly 30 miles an hour from both Glendale and Rogue River. I-5 on-ramps in the project area were also temporarily closed during the rolling slowdowns.

Climbing lane construction required closing the I-5 emergency shoulder and placing concrete barriers to separate traffic from the construction work.

According to Paselk, an estimated 250,000 cubic yards of soil and rock were moved to clear room for the new northbound truck climbing lane.

Steep climbs
Motorists encounter many of the steepest grades on the interstate highway system on I-5 in southern Oregon.

The I-5 shoulders, designed to provide a safe refuge for disabled vehicles, are sometimes used by commercial trucks to navigate southern Oregon’s mountain passes. Trucks using the shoulder cause significant damage that requires frequent repair.

“The Federal Highway Administration identified that some of the worst truck bottlenecks in the nation are caused by steep grades on I-5 in southern Oregon,” said ODOT Project Leader Mark Leedom, who managed design for the project. “On each steep climb, trucks slow down in the outside lane, which results in immediate congestion on the pass, increasing the possibility of crashes.” 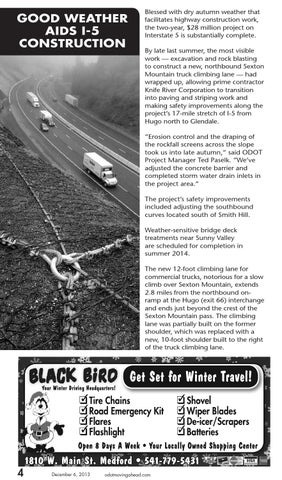