This 3.6-mile section of Oregon 62 is located north of Eagle Point, between Linn Road and Oregon 234.

The relocation of a limited number of mailboxes were required as part of the widening work. A left-turn pocket was constructed for Barton Road and culverts were replaced within the work zone.

The project’s design improvements required that utilities be relocated before the prime contractor, Oregon Mainline of McMinnville, began nighttime construction.

Prior to the start of construction, an ODOT project team briefed the Eagle Point City Council and received an exception to the city’s noise ordinance for the nighttime work.

“Traffic is heavy on this section of highway, especially during the summer,” said ODOT Public Service Representative Dennis Steers.

Construction work began after the Fourth of July holiday to reduce impacts during the busy summer tourism season. The project was substantially complete last October. 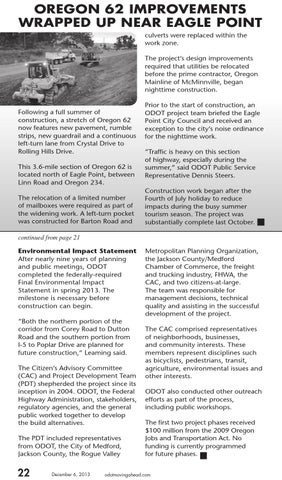