The story behind our cover

During a Moving Ahead production meeting last summer, Advertising Director Dena DeRose shared her recent visit with Betsy Sandberg, owner of Rebel Bricks in Grants Pass. The more Dena described the store — the models, the mini-figures, the platform displays — the more our team members leaned forward and broke out in smiles.

The excited team members began asking questions: how could we design a Lego cover? What would it look like? Who would build it? We briefly considered using Legos for our September cover but realized building an entire display of downtown Medford and the Interstate 5 viaduct was beyond our reach. A beautiful aerial photograph fit better instead, so we postponed our Lego plans until winter.

Betsy Sandberg painstakingly built the ODOT snowplow and the winter landscape, using our past winter covers as a guide. Our photographer, Steve Johnson, arranged the cover shoot. He added post-production touches: decals and striping to the snowplow and snow-covered trees in the background, the latter a nod to the beautiful, organic imagination children possess.

ODOT snowplows are a key resource to keep highways open during winter. Drivers should give winter maintenance vehicles such as plows and sanders a wide berth. They do not travel at high speeds and other vehicles quickly overtake them. The best advice is to stay at least three car lengths behind winter maintenance vehicles and give yourself more time to get where you are going.

Please take another look at our cover and enjoy the magic Betsy and Steve created. And, please, drive safely this winter. 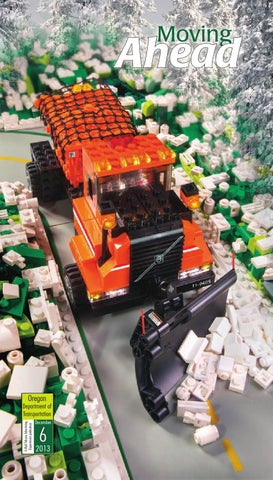