With a winter maintenance goal to maintain a safe driving surface, ODOT maintenance crews throughout the Rogue Valley use many different tools and practices, including plowing, chemicals, salt, and sanding materials, to stay ahead of the winter weather.

ODOT maintenance crews also transition their schedules to provide 24-hour coverage during the winter to keep employees fresh and ready to respond to any storm, day or night.
“Our crews really gear up for winter,” said ODOT District Manager Jerry Marmon. “When a snowstorm hits the Interstate 5 mountain passes, it’s an all-hands-on-deck event.”

Siskiyou Pass
The Siskiyou Pass presents a unique challenge. When a storm hits Southern Oregon, the highest priority is the ten-mile stretch of Siskiyou Pass on I-5 due to its importance as a national freight route and its high traffic volumes.

“Because of the grades, the traffic and the experience of drivers on Siskiyou Pass, we go to a higher standard of traction devices,” Marmon said. “When we say chains are required on the Siskiyous, every vehicle has to chain up except vehicles equipped with four-wheel drive.”

Ill-equipped for winter travel
Storm-related delays and short-term closures on the Siskiyou Pass are a common occurrence. However, motorists are often caught ill-equipped to travel over the I-5 mountain pass.

“One of the biggest errors we see is people unprepared for winter conditions and a long wait in their car,” said Marmon. “We’ve seen people in shorts and tennis shoes. They have no gloves and no flashlight, but they’re bent over in the snow trying to chain up.”

Be Safe! Be Seen!

Morning and evening commutes are now darker and often foggy, making it harder for drivers to see pedestrians, cyclists and even other motorists. The Rogue Valley Transportation District (RVTD) recently distributed reflective wristbands, ankle cuffs and jacket zipper pulls during our “Drive Less Challenge” to improve safety. Wearing light colored clothing is often not enough to be seen. Reflective clothing and materials such as RVTD wrist bands are a better option and will help you and your loved ones ‘Be Safe and Be Seen.’

Bus Stopper devices have been added at 100 bus stops on RVTD routes to assist riders who want to alert a driver. The Bus Stopper device is attached to the bus stop pole. When pressed, it alerts the bus driver that someone wants to be picked up. In rural areas it is especially difficult for bus drivers to see waiting passengers.

Whether you are waiting for the bus, walking to work or school, or cycling along the Bear Creek Greenway make sure you are ‘Safe and Seen!’ Come pick up a reflector from RVTD or invest in a reflective jacket or shoes, both are easy steps that could save your life.

The Story Behind our Cover 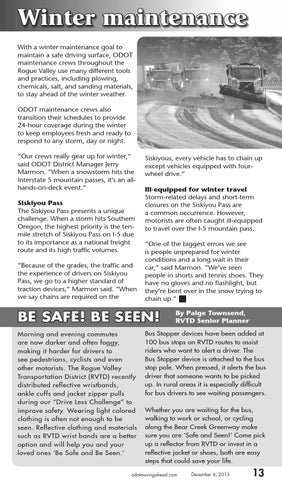