The Oregon Transportation Commission recently selected the Medford Viaduct environmental study to receive $4 million in discretionary Enhance funding, a category of the ODOT capital improvement program that focuses on projects that enhance, expand or improve the transportation system.

“This is a fantastic opportunity,” said ODOT Principal Planner Lisa Cortes. “The Enhance funding allows our agency to prepare a facility plan in conjunction with the National Environmental Policy Act (NEPA) and the project development process.”

“The facility plan provides ODOT and local agencies and other stakeholders with a priority list of specific improvements,” Cortes said.

“Recommended improvements will likely focus on capacity, safety, and changes to the local road network. Some solutions might be a combination of them all.

“Any future project for the Medford viaduct would also need to balance environmental issues with Bear Creek, park land and expensive right of way costs.”

The facility plan’s objectives are to:

• Evaluate the need for capacity improvements to address future needs based on the adopted comprehensive land use plans of Medford and Jackson County;

• Coordinate the study’s efforts with other plans and projects in the study area; and

“When you start talking about replacement, project costs start at hundreds of millions of dollars,” Cortes said. “It is imperative that we look at improvements at a lower range of costs that optimize public dollars.

While the facility plan develops a 20-year vision for the structure and the community, the environmental study goes into greater depth, addressing the challenges presented by more than 50 years of residential and commercial growth around the Medford viaduct.

According to Cortes, the scale of major project concepts, such as a full replacement of the Medford viaduct, or the addition of another deck atop I-5, far exceeds the level of transportation funding expected through year 2020. 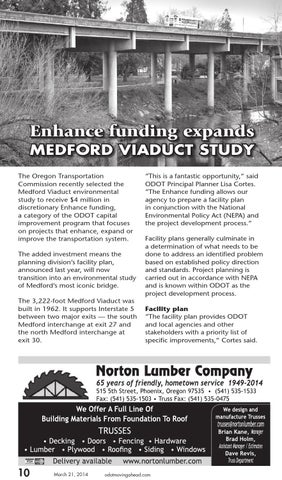