I-5: Glendale to Hugo Paving and Sexton Climbing Lane project

With most construction work conducted off Interstate 5 during the winter, motorists might be inclined to think the I-5: Glendale to Hugo Paving and Sexton Climbing Lane project is finished.

However, that’s not the case. Work continued on curbs, inlets and erosion control.

Once the weather improves (drier and warmer), prime contractor Knife River Corporation of Central Point will tackle a short list of items to wrap up the $28 million improvement project.

“When it warms up, we’ll work on the Sunny Valley (exit 71) and Glendale (exit 80) bridge decks, along with some final paving, striping and fencing,” said ODOT Project Manager Ted Paselk, “and then the project will be a wrap.”

By late last summer, the most visible work — excavation and rock blasting to construct a new, northbound Sexton Mountain truck climbing lane — wrapped up, allowing Knife River Corporation to transition into paving and striping work and making safety improvements along the project’s
17-mile stretch of I-5 from Hugo north to Glendale.

Last summer, ODOT used rolling slowdowns to keep traffic moving during the blasting stage. Pilot vehicles slowed I-5 traffic to roughly 30 miles an hour from both Glendale and Rogue River. I-5 on-ramps in the project area were also temporarily closed during the rolling slowdowns.

Climbing lane construction required closing the I-5 emergency shoulder and placing concrete barriers to separate traffic from construction work. According to Paselk, an estimated 250,000 cubic yards of soil and rock were moved to clear room for the new northbound truck climbing lane.

Motorists encounter many of the steepest grades on the interstate highway system in southern Oregon.

The I-5 shoulders, designed to provide a safe refuge for disabled vehicles, are sometimes used by commercial trucks to navigate southern Oregon’s mountain passes. Trucks using the shoulder cause significant damage that requires frequent repair.

When one truck attempts to pass another slow-moving vehicle, both lanes are blocked, forcing traffic to brake or change lanes to avoid a collision. Some trucks drove along the shoulder but this left no room for disabled vehicles.

ODOT expects the new climbing lane will reduce the frequency of I-5 closures related to commercial trucks, especially during winter driving conditions. The new climbing lane is built to today’s engineering standards, thereby reducing the need for ongoing shoulder maintenance.

Over the past couple of years, ODOT added three short climbing lanes, each roughly one-mile long, on I-5 in Douglas County. The truck climbing lanes are located southbound at Rice Hill (milepost 147) and one in each direction on ‘Gumby Hill’ (milepost 137), the steep grade located between Sutherlin (exit 136) and Oakland (exits 138 and 140). 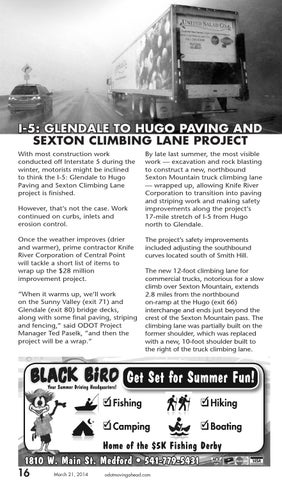