STIP projects out for public review

The list of Rogue Valley projects for the 2015-2018 State Transportation Improvement Program is out for review. The STIP is ODOT’s short-term capital improvement program developed through the coordinated efforts of ODOT, federal and local governments, ACTs, tribal governments and the public. Read more online at: www.oregon.gov/odot/HWY/Region3/Pages/STIP.aspx

Oregon 140: Exit 35 to Blackwell Road — This project would add a center turn lane, widen shoulders and add a bike lane to Oregon 140 north of Central Point.

Table Rock Road: I-5 to Biddle —  Upgrades to this two-lane route south of Biddle Road would include a center turn lane, sidewalks and bike lanes.

Lozier Lane (Medford) — Improvements to this one-time rural road are needed due to its narrow width, with no sidewalks or bike lanes. Several pedestrian-related crashes have occurred on Lozier Lane between West Main and Stewart Avenue.

Linn Road: between Oregon 62 and Buchanan (Eagle Point) — This project would widen Linn Road to accommodate sidewalks and bike lanes.

I-5: Medford Viaduct Environmental Study — Building upon the facility study already on schedule, this would connect that with the environmental study. 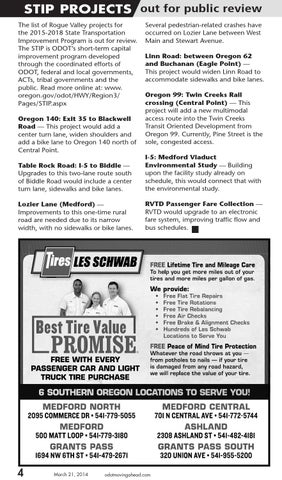