As construction winds down on the newest section of the Bear Creek Greenway, the next phase of the Rogue River Greenway breaks ground. The two greenways — a 50-mile safe, recreational corridor for bicycles and pedestrians — will eventually connect Jackson and Josephine Counties.

KOGAP Enterprises of Medford began construction late in May on a one-mile section of the Rogue River Greenway located north of Gold Hill. The $906,000 addition will construct a concrete bridge across Sardine Creek and a new path to the north that travels under the historic Rock Point Bridge. The addition ties into the existing one-third of a mile of greenway that parallels North River Road near Del Rio Vineyards. Most of the work will be completed this summer; bridge installation will take place next fall.

Most of the progress on the Rogue River Greenway project  is between Gold Hill and the City of Rogue River, including approximately three-and-a-half miles of trail from Twin Bridges Road through Valley of the Rogue State Park to the Depot Street Bridge.

“Much like occurred on the Bear Creek Greenway, which is celebrating its 40th birthday, segments of the Rogue River Greenway are being completed as property and funds are secured,” said Stanke. “We hope to not have to wait another 40 years to cut the ribbon between Ashland and Grants Pass.”

The $1.7 million Bear Creek Greenway project fills the greenway gap from Central Point’s Pine Street Bridge north along the Jackson County Expo grounds and ponds and ties into the existing Greenway at Upton Road. Instead of following Bear Creek along the entire stretch, much of this section provides a safe route on the west side of the Expo grounds, paralleling Penninger Road on public property.

“Trails are a great transportation and recreation assets that enhance the livability of our communities,” said Stanke. “We’re fortunate to have the backbone of a great system. We have many folks to thank for their vision and their efforts to get to where we are today.”

Stanke was recently named chair of the Oregon Bicycle and Pedestrian Advisory Committee.

The Oregon Bicycle Advisory Committee was formed by ORS 366.112, a bill passed in 1973 by the legislature. In 1995, the Oregon Transportation Commission officially recognized the committee’s role in pedestrian issues, changing the committee to OBPAC.

The eight-member committee, appointed by the governor, acts as a liaison between the public and ODOT and advises the agency in the regulation of bicycle and pedestrian traffic and the establishment of bikeways and walkways.

“It’s important to have a Southern Oregon voice on statewide bike and ped issues,” said Stanke, “and it’s
an exciting time to be involved as more attention is being given to walking and biking at the local and statewide levels.”

OBPAC’s mission is to promote walking and biking as part of a multi-modal transportation system while providing leadership and expertise to ODOT and the state by: advancing best practices in planning, design and safety, informing and influencing and collaborating with others on transportation policy and funding. 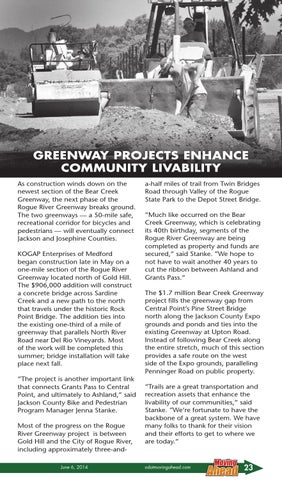