Right on schedule, U.S. 199 motorists can expect to transition from a temporary structure to the new Applegate River Bridge within the next few weeks.

The $5.9 million bridge replacement project, headed by prime contractor Carter and Company of Salem, is scheduled for completion this fall. The Applegate River Bridge is located eight miles west of Grants Pass on the Redwood Highway.

The contractor maintained a steady pace over the winter, tying steel to the concrete beams and working on concrete pours. The detour structure kept traffic moving during demolition of the 58-year-old bridge and construction of its replacement.

“The roadway approaches to the bridge are nearly finished and the contractor is working on the rail,” said ODOT Project Manager Ted Paselk. “When that’s done, we’ll get traffic back on the original alignment. I’m sure folks traveling to the coast and Cave Junction will welcome that.”

Once U.S. 199 traffic switches onto the new bridge, Carter and Company will begin the task of removing the detour structure, which is located to the north of the new bridge. Demolition of the temporary bridge will occur from mid-June to mid-September, when work is allowed in the stream bed.

“The remainder of the work should go fairly quickly once the new bridge opens to traffic and Carter and Company begins dismantling the temporary bridge,” said Paselk. “Once we hit the in-water work period in mid-June, the rest of the temporary structure can be pulled out of the Applegate River bed.”

The temporary bridge was constructed in summer 2013.

By 2011, the number of vehicles had increased to 10,300 per day. The old bridge’s narrow 30-foot roadway and bridge rails did not meet today’s safety standards, which enforced the need for a replacement project.

“The Applegate River Bridge is a vital connection between Interstate 5, the Illinois Valley, northern California and the Oregon coast,” said Paselk. “This project ensures that transportation resource will continue to serve for generations to come.”

Construction on the new Applegate River Bridge began in spring 2013. Motorists had to contend with traffic delays as fill materials were trucked in and compacted for the temporary bridge approaches and supports. Traffic shifted over to the temporary structure in August 2013.

According to Grubbs, the new bridge will also be slightly wider on the west end to accommodate a new turn lane at Riverbanks Road. 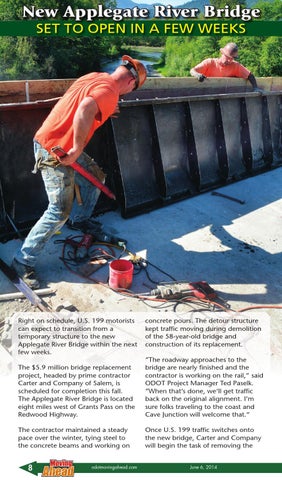