ODOT is embracing an opportunity to leverage private funds that will help connect industrial properties along the future Oregon 62 Expressway. The change requires a redesign to replace the crossing at Commerce Drive with one at Coker Butte.

Earlier this year, Coker Butte-area property owners approached the ODOT project team with an alternative crossing idea that would better connect the properties located along the east side of the Medford Airport.

While the Commerce Drive crossing provided the same access to the properties that exist today, it would have had marginal connections to several properties poised for industrial development. The property owners will donate right-of-way to reduce the cost of the design change, which is estimated to cost $1.8 million.

“By constructing the minimum extension of Coker Butte that has direct, signalized access to Crater Lake Highway, it will open those industrial properties to future job opportunities in the Rogue Valley,” said ODOT Region Manager Frank Reading. “The goal is to build the best design we can for the money we have. And we’ll do that thanks to this partnership with the property owners, the city and the airport.”

The design change requires a revision to the federally-required Environmental Impact Statement, which is expected to push the project bid date out to March 2015.

The $120 million multimodal project will increase capacity and improve safety along the Oregon 62 corridor. The corridor is a critical business connection for freight, tourism and commuters. Unfortunately, the Crater Lake Highway exceeds capacity standards. Future growth is expected to significantly increase traffic volumes.

“Higher crash rates at corridor intersections, especially from Interstate 5 to Delta Waters Road, are a safety concern,” said ODOT Public Information Officer Gary Leaming. “Oregon 62 and Delta Waters Road is the busiest intersection in the entire southwest Oregon region. The traffic counts are higher than those at I-5 north of Medford.”

The first construction phase is slated to begin in 2015.

According to ODOT Project Leader Dick Leever, the most challenging segment during the first construction phase will be located where traffic already runs heavy, between Poplar Drive and Delta Waters Road. ODOT plans to take advantage of a wide section of its own right of way on the south side of that highway section.

“Project staging is crucial to keep traffic moving and business accesses open,” said Leever. “Much of the first-phase work will be completed at night or behind solid barrier to limit the impacts to traffic.” 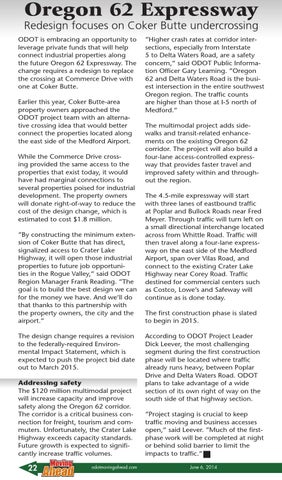