Working with the local residents and business owners who live and work along the corridor, the Oregon Department of Transportation is developing an Oregon 99 Corridor Plan that balances the important regional highway with its dual role as the main street for several Rogue Valley communities.

“For nearly a century, Oregon Highway 99 has connected Ashland and Medford,” said ODOT Planner Ian Horlacher. “It was the first paved highway in the United States to span a state from border to border.”

Interstate 5 was later built as the critical West Coast route.

“We’re trying to find a balance for Oregon 99 that meets the operational needs of the highway and local communities,” Horlacher said. “Much of that balance is tied directly to
safety issues.”

The Oregon 99 Corridor Study started in 2010 with the goal of finding ways to enhance transportation safety and capacity over the next 20 years. A technical advisory committee is comprised of the local jurisdictions along Oregon 99, including Jackson County, Ashland, Talent, Phoenix and Medford, as well as ODOT.

Travel volumes along Oregon 99 have decreased in recent years.

However, with 15,000-17,000 vehicle trips per day along the corridor, Oregon 99 needs improvements. There were 308 traffic crashes — most rear-end collisions or involved cars making left turns — reported from 2005 to 2009 along the section of Oregon 99 being studied.

ODOT staff and consultants are preparing a draft Corridor Plan for review. An open house is planned this summer so the public can review the proposals before the Corridor Plan is updated and taken to local communities for adoption.

“Many of the improvements, such as improving access and signage to the Bear Creek Greenway, are relatively low cost because they involve striping within the existing highway width and need no right of way purchases,” Horlacher said.

• From Blue Heron Park in Phoenix to the southern city limits: reduce the four-lane section of highway to three lanes with a center turn lane, bike lanes and sidewalks;

• From Phoenix to Talent, reduce the four-lane section of highway to three lanes with a 14-foot turn lane and a bike/pedestrian shoulder;

• From Talent to Ashland, reduce the four-lane section of highway to three lanes with a 14-foot turn lane and a bike/pedestrian shoulder;

• From Charlotte Ann in south Medford to Fern Valley Road in Phoenix: narrow existing highway to add a bike lane and sidewalk on each side while maintaining a five-lane section.

“While there’s no money currently tied to these improvements, just having this plan in place will help advance these proposals into the funding channel,” said Horlacher.

For more information about the work behind the Oregon 99 Corridor Plan, visit the project website: http://www.oregon.gov/ODOT/HWY/REGION3/pages/OR99Corridor.aspx. 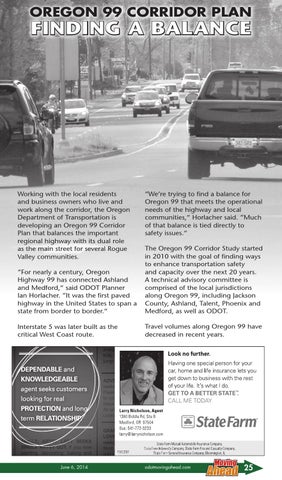