Coming off the first major phase of construction — trenching and installing a four-foot drainage pipe across Interstate 5 — the Fern Valley Interchange project transitions into summer mode.

“Summertime is construction time,” said ODOT Public Service Representative Dennis Steers. “We’re going to make it as easy as we can for drivers.”

The $72 million Fern Valley Interchange project will improve Phoenix’s I-5 interchange, where traffic congestion is severe during the morning and evening commutes. Existing and proposed development along the east side of I-5 in Phoenix has reduced the capacity and created safety issues at the interchange.

Prime contractor Hamilton Construction of Springfield will build the first Diverging Diamond interchange in Oregon. The Missouri Department of Transportation built the first interchange with this new design in 2009.

The new interchange will be built just north of the existing bridge, leaving most roadways west of the interchange relatively untouched. The Diverging Diamond interchange design has a narrow footprint, which helps avoid touching most businesses during and after the interchange project. The crossing diamond design also helps keep traffic congestion to a minimum while increasing safety.

“The Diverging Diamond design provides a higher capacity to move traffic while reducing right of way needs,” said Steers. “Drivers will move to the opposite side of the road to enter I-5 or to cross it. This movement reduces the number of signal phases a driver needs to clear.”

I-5 drivers are benefitting from many safety features in the Fern Valley Interchange project work zone. Beyond the ubiquitous cones and barrels, the project employs TripCheck traffic cameras, the Rogue Valley’s first Incident Response vehicle, and transverse rumble strips that will be built into the temporary southbound off-ramp to notify drivers of the shorter deceleration distance before reaching the signalized intersection.

“We also lowered the I-5 speed limit to 50 mph because of the narrowed travel lanes,” said ODOT Public Information Officer Gary Leaming. “All of these tools are designed to reduce work zone crashes. Studies show that driver inattention is the biggest factor in work zone crashes.”

The TripCheck cameras were installed on the sign bridge that spans northbound I-5 about one mile north of the Phoenix interchange. More cameras are being installed east and west of the I-5 interchange.

“The public made it clear they found the cameras an invaluable resource during the open trench work across I-5,” said Steers. “We used the cameras during the South Medford Interchange project and received nothing but positive feedback from drivers.

“The new TripCheck cameras around I-5 exit 24 will provide drivers with the timely information they need to avoid congestion during construction.”

Construction work on tap this summer

The Fern Valley Interchange project’s size and complexity requires more than two full construction seasons to complete the job. The project also realigns North Phoenix Road between Peterbuilt Motors Co. and Home Depot. The project, which encompasses I-5, Oregon 99 and Fern Valley Road, is scheduled for completion in September 2016.

Most of the recent work — large-scale earth moving and blasting to build the new North Phoenix Road alignment — has kept the east side of the interchange busy.

Over the summer, the contractor will transition into bridge building, spanning both I-5 and Bear Creek.

Temporary southbound on- and off-ramps will keep Phoenix connected to the I-5 corridor. The staging also will open a large area for Hamilton Construction to construct the entire project in a more efficient approach that reduces traffic impacts.

Construction is also underway on the new Bear Creek Bridge, which will replace the 68-year old structure that is currently load limited.

ODOT opened a temporary construction office within ‘The Shoppes at Exit 24’ shopping mall last February. The office serves as a base of operations for the project inspectors, although the public is welcome to stop by the office for more information.

ODOT Public Service Representative Dennis Steers can be reached directly at 541-621-7034 or Dennis.Steers@odot.state.or.us. Steers is pounding the pavement, meeting with property owners and the general public to keep them informed of the work ahead.

“A major project goal is to keep construction impacts to a minimum,” said Steers. “We’re using traditional media, social media and other communication resources to reach out to commuters. We want to encourage them to use alternate routes and adjust their travel plans to avoid the busiest traffic periods of the day.

“We will do our best to minimize the construction impacts, but there will be traffic impacts.”

“How will drivers negotiate the new interchange design?”

That’s a frequent question from local drivers and Phoenix residents, including stakeholders who have followed the project’s long development process. A 3-D traffic simulation completed in fall 2013 shows how the new crossing diamond interchange will operate.

“There is nothing like people seeing it for themselves,” Leaming said. “The video makes it much easier to explain how the Fern Valley interchange will look when completed.”

The 3-D traffic simulation video is featured online at the project website.

The project’s design phase began in 2004. The Fern Valley Through design alternative was eliminated in 2009 because it would have an adverse impact on nearby farm land. The project development team later unanimously supported the North Phoenix Through Build alternative as part of the federally-required environmental assessment.

The project team collaborated with several private contractors in 2012 to develop construction methods best suited for the challenges ahead of this project, such as the close proximity of the new bridge ramps to the existing ramps. Significant grade differences are some of the challenges. For instance, the new roadway at the top of the southbound I-5 off-ramp is designed to rise nearly eight feet higher than the current level.

“Reducing congestion during construction is quite a trick in such a tightly-developed commercial and residential interchange area,” said ODOT Project Leader Dick Leever.

Aesthetic features inspired by the hills and grasses — the natural colors surrounding the Phoenix area — are in the final design. 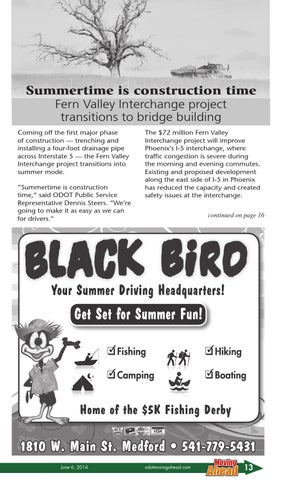