A strong multimodal transportation system is vital to a vibrant economy — good jobs, a clean environment, safe communities, a good quality of life and healthy people.

Federal transportation funding plays a major role in preserving and improving Oregon’s transportation system. Each year, ODOT and local governments receive over half a billion dollars in federal highway, transit, and safety funding. This money is used to fix bridges, repave highways, rebuild interchanges, address safety problems, and help transit agencies buy buses and provide essential service that reduces congestion. These investments pay dividends for years to come, getting workers to their jobs and helping Oregon firms get products from our farms, forests and high-tech factories to market.

The federal government pays for its share of transportation investment with user fees on drivers. The cost of each gallon of gas includes a federal gas tax of 18.3 cents which gets deposited in the federal Highway Trust Fund. For the average driver, that adds up to about $100 a year.

The historic federal partnership with the states for maintaining a strong transportation system has frayed in recent years. The federal gas tax hasn’t been raised since 1993, back when gas cost a little over a dollar a gallon and before inflation eroded the purchasing power of the tax. As a result, the user fees flowing into the Trust Fund have lagged behind even conservative projections of transportation investment needs. The Trust Fund has run a significant deficit since 2008. To avoid debilitating cuts to programs that pay for roads, transit, and safety projects, Congress has provided short-term fixes by multiple transfers of general fund money, totaling about $55 billion into the Trust Fund.

The federal Highway Trust Fund is projected to run out of money sometime this summer. Surface transportation funding will drop by about 30 percent unless Congress comes up with additional resources to pay for transportation projects.

The implications for Oregon are significant. The state’s own Highway Fund resources are pretty much fully dedicated to debt service, highway maintenance, and operations. Federal highway funds are the only source of money for new construction projects that improve and preserve the state transportation system. If Congress does not provide additional resources for the Highway Trust Fund, Oregon’s federal transportation funding would be cut by over $150 million per year.

ODOT and its advisory committees — including the Rogue Valley Area Commission on Transportation —  just finished an arduous process of selecting a few high priority projects for the 2015-2018 Statewide Transportation Improvement Program (STIP) from among many worthy applications. If new federal funding is not made available, that project list would have to be revised, and a large number of road, bridge, transit, and bicycle and pedestrian projects would have to be cancelled or delayed.

Local governments would be hard hit, as they receive 25-30 percent of Oregon’s federal highway funding, and impacts to transit could be severe. Cuts to transit programs could run more than 40 percent, which could force agencies to make deep service cuts and cause significant hardship for those who rely on public transit.

Developing a transportation project from an idea to a finished project takes years. Knowing how much money will be available to pay for the project when it goes to construction years in the future is critical to the project design and initial planning work that begins in year one.

Without knowing whether federal funding will be available at current levels in the future, ODOT will have to take a conservative approach to its construction program — to avoid promising more projects than it can actually deliver. ODOT is already developing contingency plans to delay putting projects out to bid next year if Congress doesn’t take action. And the long-term situation is even more challenging, because it’s hard to plan for projects six or more years out when the level of funding available six months from now is an unknown.

That’s why the Oregon Transportation Commission recently decided to hold off on project selection for the next STIP. Instead of moving forward now on a STIP that selects projects for 2019 and 2020, we’re going to wait a year to see if action (or inaction) by Congress provides more clarity on federal funding and gives us a better idea how many projects ODOT will be able to deliver.

Most of the issues Congress has to deal with are hard, and coming up with new resources will be among the hardest because it requires a boost in general taxes or user fees. But without meaningful action by Congress, Oregon will see a significant loss of investment in its roads and transit, and our economy and communities will pay a high price. 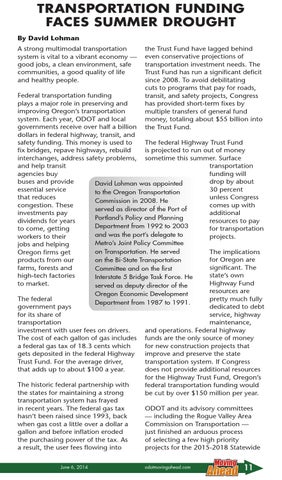